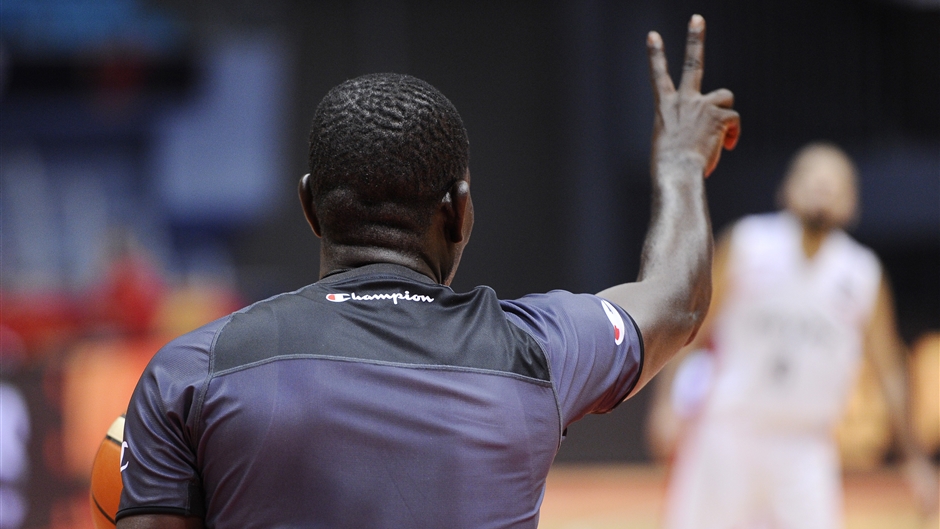 Two teams of maximum 12 players, with a maximum of five players of each team on the court at any time.

Teams may make as many substitutions as they like.

The objective of the game is to put the ball in the opposing team’s basket.

The team with the most points at the end of the game wins.

The game consists of four periods of 10 minutes.

If the scores are tied, overtime periods of five minutes will be played until one team has more points than the other (at the end of the 5-minute period)

A basket scored from near the basket (inside the three-point arc) is worth two points.

A basket scored from far (beyond the three-point arc) is worth three points.

A basket scored from the free-throw line is worth one point.

The ball may either be passed from one player to another, or dribbled by a player from one point to another (bounced while walking or running).

Before passing or shooting the ball, a player may take two steps (without dribbling).

Once a player has stopped dribbling, he may not start to dribble again.

Once the team in possession of the ball has passed the half-court line, it may not cross back over the line with the ball.

When a team gains possession of the ball, they have a maximum of 24 seconds to attempt a shot.

Additionally, offensive players may not remain within the restricted area (key) for more than three consecutive seconds.

A personal foul occurs when there is illegal contact between two opponents. A player who makes more than five personal fouls is excluded from the game.

A foul made on a player attempting a shot results in the awarding of the same number of free-throws as those of the shot taken (two from inside the arc, three from outside). If a player is fouled but makes the attempted shot, the shot counts and an additional free-throw will be awarded.

Once a team has made four fouls in a period, each additional foul (on a player not attempting a shot) will result in the automatic awarding of two free-throws.