Luwawu-Cabarrot eager to play for France at FIBA EuroBasket 2017

PHILADELPHIA (FIBA EuroBasket 2017) - Emerging NBA talent Timothé Luwawu-Cabarrot has been in contact with the French Basketball Federation (FFBB) but doesn't know if he'll be invited to the country's FIBA EuroBasket 2017 training camp.

The Philadelphia 76ers rookie shooting guard will seize the opportunity with both hands if coach Vincent Collet asks him to join the senior side.

"Yes, that is a goal for me," Luwawu-Cabarrot said to FIBA.com. "I was recently in contact with the French federation and I hope they'll call me to play for the national team soon.

"I still don't know what to expect and if I am going to be called but if I do go to Pau for the training camp, I'll fight for a spot on the final roster for EuroBasket 2017."

Luwawu-Cabarrot, the 24th pick overall by the Sixers last June after a year at Mega Leks in Serbia, has enhanced his chances of playing for France after being given a chance by coach Brett Brown to play big minutes late this season. He has put on some eye-popping performances.

TLC a Stand Out in Home Finale

With veteran Nicolas Batum of the Charlotte Hornets having just announced that he is going to take the summer off from national team duty, now may be the perfect time to give the 21-year-old Luwawu-Cabarrot his senior team baptism. He last put on the French jersey at the FIBA U20 European Championship 2015 and he led the team in scoring (11.6 points per game) and steals (1.7 steals per game).

Rookie Timothé Luwawu-Cabarrot in the month of April:

"I'm ambitious and if called, I'm going to do everything I can to get a spot on the final roster," he said. "I know that I can help the national team and that I can have an impact."

France are about to launch a new era with Tony Parker, Mickael Gelabale and Florent Pietrus having ended their national team careers after the Rio de Janeiro Games.

"I want to come play with Les Bleus every summer and win the most medals and titles I can with the national team. We have a lot of talented players and we can make history."Timothe Luwawu-Cabarrot

The uncertainty over Evan Fournier's involvement following his Olympic snub means there are several roster spots to be filled. Fournier didn't make himself available for the 2016 FIBA Olympic Qualifying Tournament (OQT) in the Philippines but wanted to play in Rio.

Coach Vincent Collet elected to take the same roster from the OQT to Brazil, with the exception of dropping big man Adrien Moerman and adding NBA center Rudy Gobert.

Luwawu-Cabarrot has had a whirlwind year, making the switch from the Adriatic League to the NBA.

"It's been a dream come true and one of the goals that I've had since I was a kid," he said. "The season started very slowly, I didn't play that much in the first couple of weeks, but I really appreciated the whole process of my first season in the league.

"I really learned a lot about how to be an NBA player, the routine, life in the USA in general and most importantly, about the game. There are so many games, the rhythm is very intense and you have to get used to it, gradually."

There have been other challenges.

"I speak, and understand, English better, too, which is very important," he said, "because at the beginning, I didn’t understand everything that people said.

"I had to learn some slang too (laughs) in order to understand what the guys were saying. I had to get used to my new life, but the season has finished the best possible way for me."

With his burgeoning career in the United States and his eagerness to join the senior team, it seems a good bet that the Cannes-born player will be in the line-up when France take on Poland, Greece, Iceland, Slovenia and Finland in the Group Phase of FIBA EuroBasket 2017.

"My goal is to win medals and titles," he said. "I want to come play with Les Bleus every summer and win the most medals and titles I can with the national team. We have a lot of talented players and we can make history." 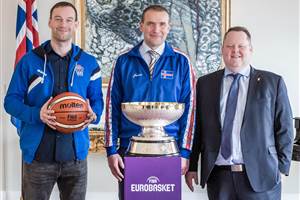 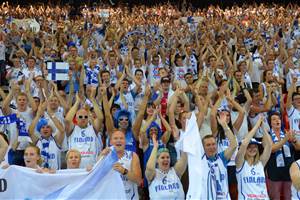