10 of the best signings of the EuroCup Women off-season

MUNICH (Germany) - There have been some exciting additions in the off-season involving a host of different clubs getting ready to take the court for the EuroCup Women Regular Season. 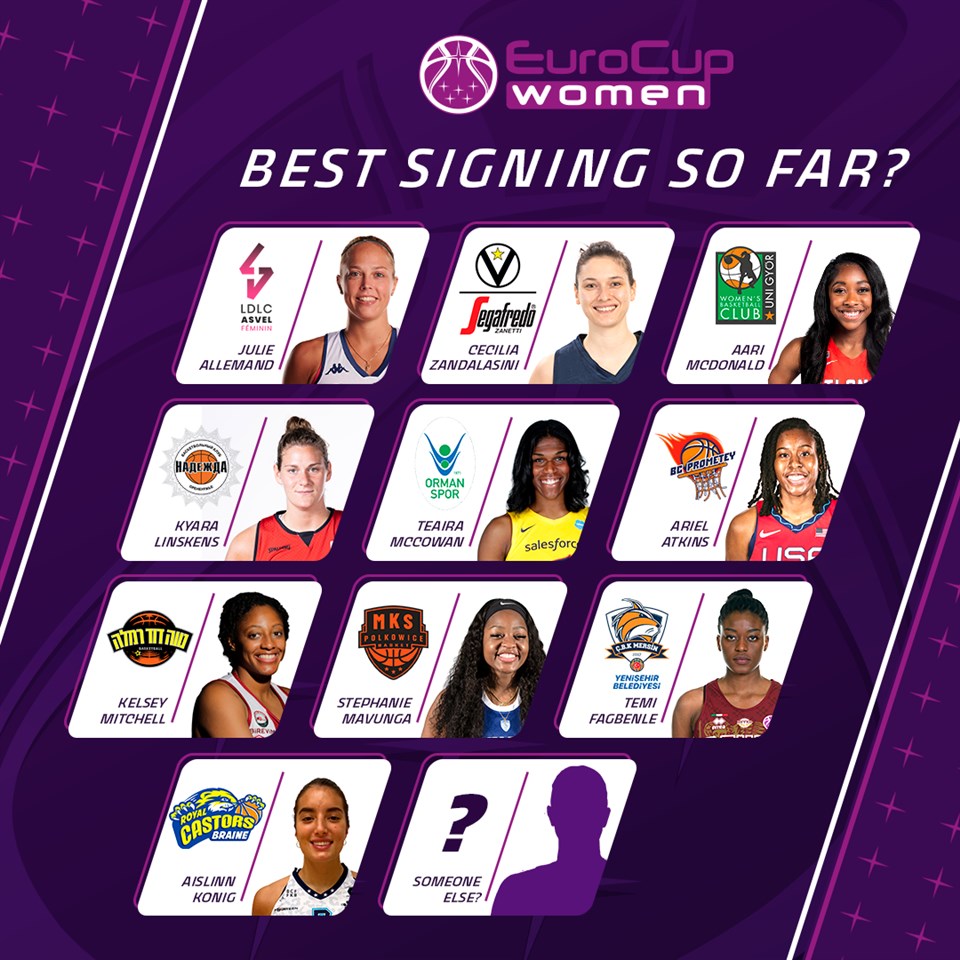 Here is a selection of just some of those that have caught the eye and you can also vote for which is the best in the fan vote at the bottom of the page.

One of the best playmakers in the female global game now, Allemand spent last season at BLMA but is back on board in Lyon and looking to show her best work for the ambitious French outfit. After they missed out on a EuroLeague Women return, the Belgian point guard can take them deep in this tournament and it would be a shock if they did not seriously challenge for silverware. Allemand has lit it up on the biggest international stage with the Belgian Cats, in the WNBA and at club level. So, expect her second spell with LDLC ASVEL Feminin to be a highly productive one!

Having spent the last few years living in Istanbul and the pressure cooker surroundings of representing Fenerbahce, Zandalasini has headed back home to Italy for the start of a new project. Bologna want to become a force in the women's game outside of their homeland and having the scoring talent and leadership of Zandalasini is a great move. She will be the centerpiece of the franchise in every way and she will no doubt put the team on her back in games if needed. Yet she will also be a creator as usual and after disappointment at the FIBA Women's EuroBasket with Italy this past summer, taking her new team to success both domestically and in EuroCup Women would be a big boost.

One of the new faces landing in the competition, there are high hopes for McDonald who was the third overall WNBA draft pick this year, snapped up  by the Atlanta Dream. That came off the back of taking Arizona to their inaugural NCAA Championship Final having poured in more than 20 points per game during her college career. She opened up in the Hungarian League this past weekeed with 16 points, 7 boards and 5 assist - just the kind of do-it-all game that Gyor will need from her.

Linskens has been an integral part of Belgium's rise to prominence on the international stage at the European and global level in recent years. With that experience of playing against the World's best she continues to cement her status as a highly capable and sometimes underrated player. Her previous time in Russia with Enisey Krasnoyarsk will serve her well and if she can repeat that kind of form when she averaged a season double-double, it will be huge for her new team. Her shot blocking ability always stands out too.

The first pro-season in Europe for the highly rated center will be at Orman Genclik who have signed one of the strongest and most consitent players in the game. She averaged a near WNBA double-double with Indiana Fever and also landed 23 points and 15 boards per game while playing her first season overseas with Beijing Great Wall in the WCBA. She will be tough to contain for the opposing defense and will be ready to impose herself form the moment she takes to the floor.

What a fantastic coup it is for the ambitious Ukraine club who have landed not only a  premier WNBA performer who netted more than 16 points per game in the latest season, but also a Tokyo 2020 gold medalist. Atkins first played   in the competition during the 2018-19 campaign while with Gorzow and has since played for Elazig in Turkey, wedged either side of a spell in Australia for the Perth Lynx. With as many minutes as she likes, the productivity of the dynamic guard is likely to rocket and she will be firmly top of opponents' scouting reports.