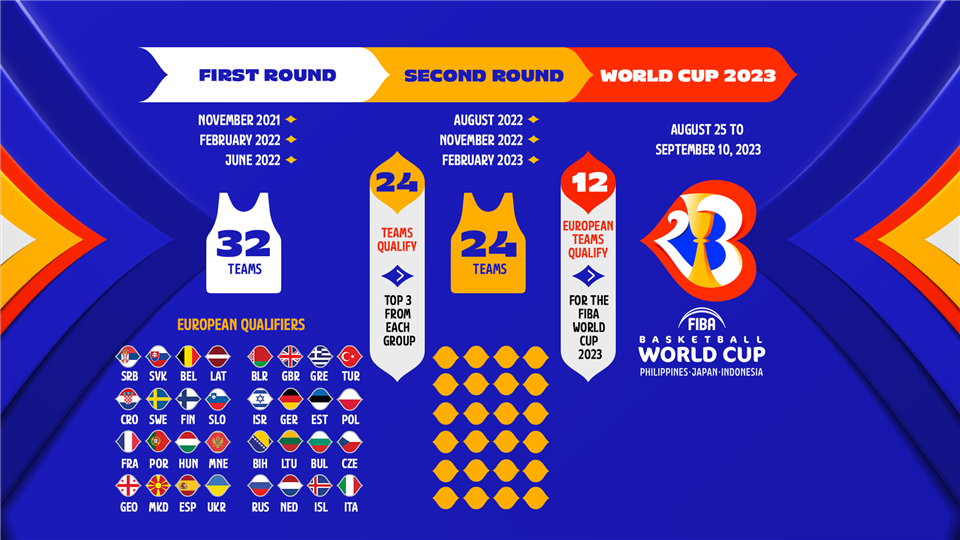 The 32 European teams will play six windows for the European Qualifiers. 12 teams will qualify to play in the 2023 edition of the World Cup that will take place in the Philippines, Japan and Indonesia.

In the First Round, the 32 teams will be divided to eight groups (A-H) of four. Each team will face the other three teams in their group over the first three windows. These windows will be in November 2021, February 2022 and June 2022.

The top three teams from each group will advance to the Second Round of the European Qualifiers. This group will join another three teams to form another group. All teams will carry over the results from the First Round.

In the Second Round, each team will play games with the three teams from the other group over the final three windows. The Second Round windows will take place in August 2022, November 2022 and February 2023. At the end of these additional six games per team, three teams from each group will qualify to the FIBA Basketball World Cup 2023.

How did teams make it to the European Qualifiers?

For the 32 team field participating, 24 of the teams come from those that qualified for the FIBA EuroBasket 2022. An additional eight teams qualified through the FIBA Basketball World Cup 2023 European Pre-Qualifiers.