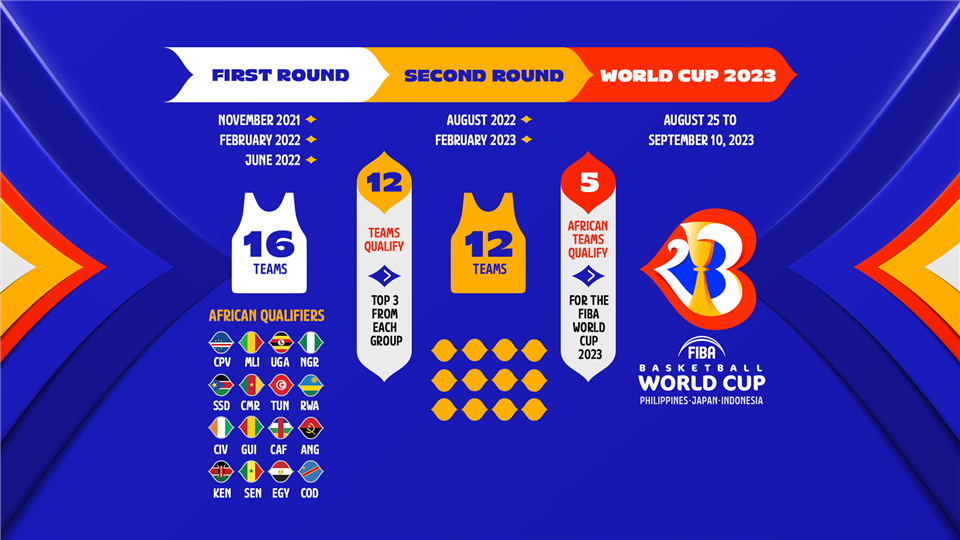 In the first round, the 16 teams will be divided into four groups with four team apiece. Each team will face the other three teams in their group in two tournaments played over three event windows. The teams will play three games in each window. These nine-day windows will be played starting in November 2021, February 2022 and June 2022.

The top three teams from each group will advance to the Second Round of the African Qualifiers. Here, the group’s three advancing teams will join three other teams to create two six-team groups.  All teams will carry over their results from the First Round.

In the Second Round, each team will play each new team in their group during two tournaments played over two event windows schedule in August 2022 and February 2023.

At the end of these additional six games per team, the two top teams in each group, along with the best third-placed team, will qualify to the FIBA Basketball World Cup 2023.

The windows are where teams will play the qualifying games. Each of the five windows for the African Qualifiers are nine days in length.

How did teams make it to the African Qualifiers?

Yes! A team's final record after the conclusion of the Second Round includes their win-loss record from the First Round. This helps ensure every game matters throughout the five qualifying windows.