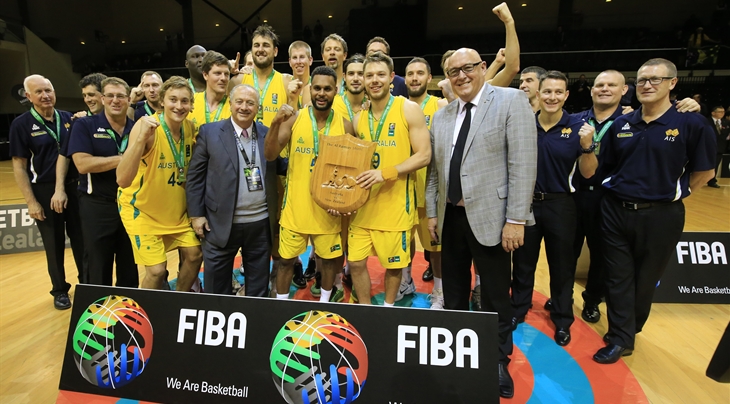 On a night where the Tall Blacks' one-man wrecking crew Corey Webster (16 points, 7/24 field goals) couldn't find his range, the Boomers depth shone through, with seven players scoring between eight and 14 points.

"Our strength is in our depth, which enables us to play at a sustained level for 40 minutes," Australia coach Andrej Lemanis said.

"Some of that is defensively, but offensively we’re not reliant on a player to carry the load for us.

"We're able to use all the tools we have and tonight I was particularly pleased with the understanding of the group of our advantages at different times and how to get those guys the ball."

For the Tall Blacks, the unlikely pair of Reuben Te Rangi (14 points, 4/5 three-pointers) and Everard Bartlett (13 points) filled the breach, while Lindsay Tait's defense was outstanding, but their gallant efforts weren't enough.

Tom Abercrombie put his Game 1 blues behind him with a tough runner early, but it was Dellavedova who made the early running.

Controlling the Australian offense coolly, the Cleveland Cavalier racked up seven quick points to give the Boomers a 21-14 quarter-time lead.

"We needed to have a really solid start and gain some momentum from the get-go, and it almost went the opposite for us," New Zealand coach Paul Henare said.

"It felt like we got some pretty good looks early on but failed to put some scoreboard pressure on them."

Webster was ice cold until he nailed a classy runner, pinched a steal and fed Fotu for a dunk, then found Fotu again for a triple that brought the house down and Kiwis within three.

But Chris Goulding hit consecutive buckets, as did Bogut - including an impressive drop-step dunk, and Australia took a 40-33 lead into intermission.

Dellavedova hit a pull-up to start the third term and then Bogut took over with a steal, a dunk, two free throws and some outstanding interior defense as the Boomers' lead bolted to 14.

Te Rangi and Bartlett urged the Tall Blacks back within nine, but two missed free throws from Vukona followed by a Patty Mills trifecta sucked the atmosphere out of the arena and helped the visitors to a 66-53 three-quarter-time advantage.

New Zealand sent the troops up the floor with intensity in the final term and tested Australia's mettle, forcing repeated Boomers turnovers as Webster, Abercrombie and Vukona came to life.

The lead had reached 20 but the Tall Blacks pulled within five points, in reach of a miracle comeback, before a clutch Dellavedova three-pointer in the final minute sealed the deal.