Antetokounmpo needed just 16 minutes to collect a near double-double of 10 points, 8 rebounds, while also adding 2 steals and a block.

Both the Greeks and Montenegrins started slow, combining for only 7 points in the first five minutes of play, but it was Hellas that seized the momentum to take a 17-9 lead after the first period. Greece would never look back as they limited Montenegro to just 7 points in the second quarter to blow their lead up to 26 points at the half and seal the deal.

Turning Point:  It took some time for Greece's two-way dominance to finally kick in. Thanks to a couple of steals and great rebounding, the Greeks rattled off 10 straight points, mostly in transition, to erect their first double-digit lead, 15-4, after a Georgios Printezis fastbreak dunk. Montenegro would never recover after that.

TCL Player of the Game: Despite not starting, it was World Cup newcomer Georgios Papagiannis who shone brightest for Hellas. The 21-year-old, 7ft 1in (2.17m) center made his presence felt throughout the last 30 minutes of the game and treated the paint as his personal playground. The Panathinaikos big man ended up with 15 points, 8 rebounds and 2 blocked shots while shooting 7-of-8 from the field.

Stats Don't Lie: Montenegro head coach Zvezdan Mitrovic will rue this day for witnessing his team shoot just 34.3 percent from the floor. From the tip, Montenegro's offense was sputtering as they could hardly get into any scoring rhythm. In contrast, Greece rode the momentum they built in the first quarter for the rest of the game, finishing 33-of-58 from the field, which was good for a 56.9 percent shooting percentage.

Bottom Line: The first five minutes revealed a Greek team that looked nervous and tentative, but when they got settled in, they were unstoppable. The performance of their bench was also a welcome revelation, with Papagiannis, Printezis, Thanasis Antetokounmpo and Giannoulis Larentzakis all scoring 7 or more points. That's a testament to their depth, which will serve them well in their next assignment as they take on Brazil next.

Montenegro, meanwhile, will have to return to the drawing board and hope their offense will hum against hard-luck New Zealand on Tuesday.

They Said: "We were a bit nervous at the beginning, but we managed to stay focused at the defensive end, which allowed us to score some easy points on the fast-break. The most important thing is that we found our rhythm, and more players were able to contribute. We still have to keep improving. We have just won one game, nothing else." - Greece forward Georgios Printezis

"We had a strange start to the game, but we managed adjust at the right time. Of course, Brazil is a totally different team from Montenegro, but we’ll start our preparation right now." - Greece had coach Thanasis Skourtopulos

"Greece surprised us with a very aggressive defensive game, and that stopped us from getting our rhythm. We played much better in the second half, but Greece the better team tonight." - Montenegro forward Nemanja Radovic 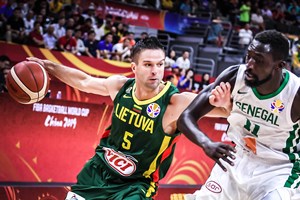 One way street as Lithuania join the century club 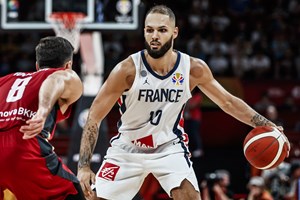