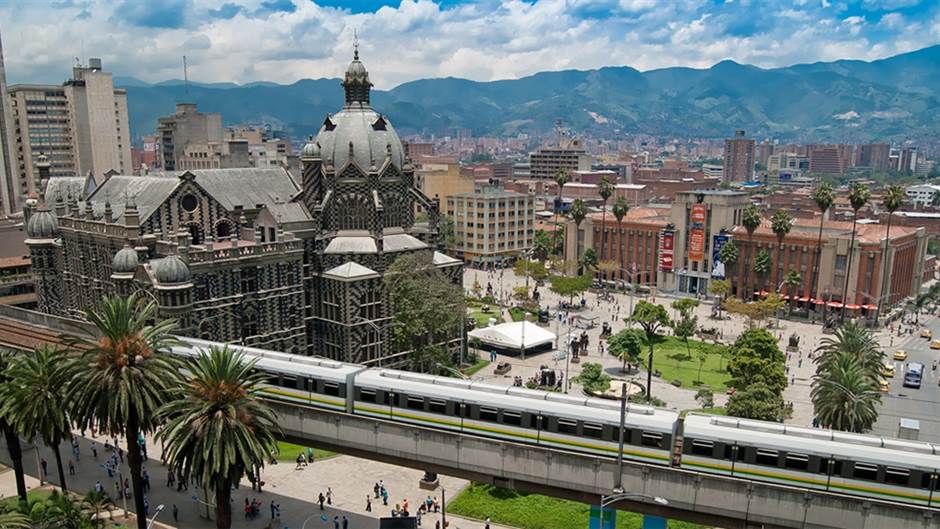 Medellín is the second-largest city in Colombia and the capital of the department of Antioquia. It is located in the Aburrá Valley, a central region of the Andes Mountains in South America. According to the National Administrative Department of Statistics, the city has an estimated population of 2.44 million as of 2014. With its surrounding area that includes nine other cities, the metropolitan area of Medellín is the second-largest urban agglomeration in Colombia in terms of population and economy, with more than 3.7 million people.

At the beginning of the 21st century the city regained industrial dynamism, with the construction of the Medellín Metro commuter rail, liberalized development policies, improved security and improved education. Researchers at the Overseas Development Institute have lauded the city as a pioneer of a post-Washington consensus "local development state" model of economic development. The city is promoted internationally as a tourist destination and is considered a global city type "Gamma -" by GaWC.

The Medellín Metropolitan Area produces 67% of the Department of Antioquia's GDP and 11% of the economy of Colombia. Medellín is important to the region for its universities, academies, commerce, industry, science, health services, flower-growing and festivals.

In February 2013, the Urban Land Institute chose Medellín as the most innovative city in the world due to its recent advances in politics, education and social development. In the same year, Medellín was announced as the preferred corporate business destination in South America, and won the Verónica Rudge Urbanism Award conferred by Harvard University to the Urban Development Enterprise, mainly due to the North-Western Integral Development Project in the city. In September 2013, the United Nations ratified Colombia's petition to host UN-Habitat's 7th World Urban Forum in Medellín, from April 5–11, 2014.

The most recent survey on the global status of the Smart Cities by Indra Sistemas catalogs Medellín as one of the best cities to live in South America, sharing first place with Santiago de Chile, and alongside Barcelona and Lisbon in Europe. Medellín won the Lee Kuan Yew World City Prize 2016. The award seeks to recognize and celebrate efforts in furthering innovation in urban solutions and sustainable urban development.