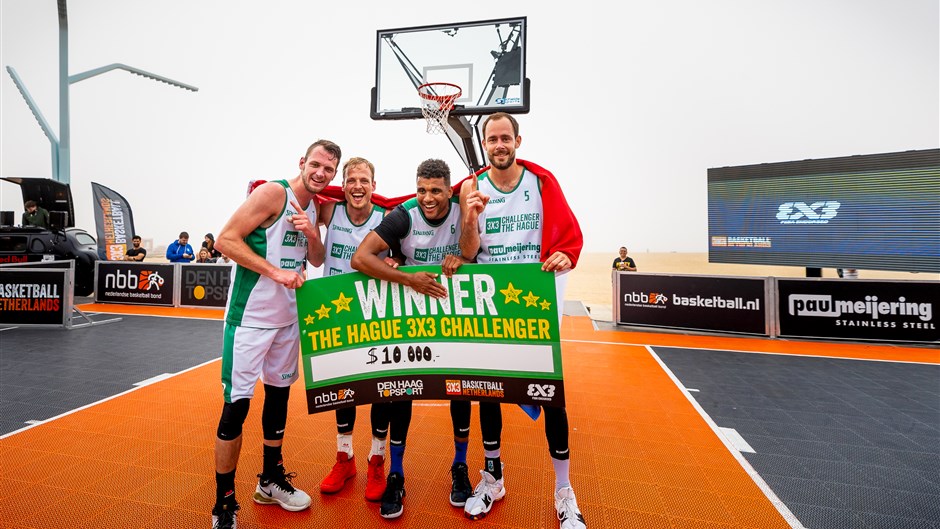 Amsterdam Inoxdeals (NED) won their first-ever 3x3 Challenger after taking down Ralja Intergalactic (SRB) in the final of the The Hague 3x3 Challenger on June 2-3, 2018.

After finishing 2nd in 2016 and 3rd in 2017, the number one 3x3 player in the Netherlands Jesper Jobse eventually won the The Hague Challenger. It took him to go full beast mode for Amsterdam to win a tournament that featured 6 of the Top 20 teams in the world.

The lefty led all scorers by a 10 point-margin and guided his team to prestige victories on Day 2 against 2-time World Tour winners Ljubljana (SLO) in the quarter-finals, the best team in the US - Princeton - in the semi-finals and a surprise Ralja Intergalactic team in the final.

The championship game was pretty one-sided though the local fans may have had déjà-vu when Ralja was down by 6 with 2 minutes to go. In the semi-finals, with the Serbian team down 17-11 against event favorites Riga (LAT), the diminutive Nebojsa Kilijan fueled a lethal 8-1 run that led to a 19-18 win.

But with the beach on the horizon, the Dutch would not bury their head in the sand. Dimeo Van der Horst set his feet in the corner and splashed a game-winning 2, that set the crowd on fire.

Besides the 10,000 USD winning cheque, Amsterdam also secured a second ticket to the World Tour. After winning a trip to the Utsunomiya Masters at the Sydney Challenger (they finished 3rd but 2nd-placed Melbourne i-Athletic (AUS) were already qualified via the NBL Pro Hustle League), the team now has secured a spot at the Prague Masters.

Ralja also wrote an important page of their history by winning their first pass to the World Tour. Very big man (6ft 10, 2.10m) Nikola Vujovic is the only player with World Tour experience: he made 1 appearance with Team Maribor (SLO) at the Lausanne Masters back in 2016.

A total of 6 teams have now qualified for the Prague Masters, which will be held on August 4-5. Liman (SRB) and Piran (SLO) [based on ranking], Amsterdam Inoxdeals (NED), Gagarin (RUS), Humpolec Bernard (CZE) and Ralja Intergalactic (SRB).

The next Challengers will be held in Hangzhou, China and Limassol, Cyprus on June 16-17, just after the FIBA 3x3 World Cup.

You can relive the challenger on youtube.com/FIBA3x3.