MUNICH (Germany) - The FIBA Europe Cup Semi-Final pairings have been confirmed, following the completion of the home-and-away Quarter-Finals on Wednesday night.

UNET Holon had already booked their ticket on Tuesday after surviving a late scare against Alba Fehervar. It is the first time the Israeli club have reached this stage of a European competition.

There was also club history for s.Oliver Wurzburg, who made the last four in only their third international season after eliminating last year’s Semi-Finalists Bakken Bears.

The Semi-Final field is completed by two Italian teams in Dinamo Sassari and Pallacanestro Varese after they prevailed over Pinar Karsiyaka and Filou Oostende, respectively.

For Dinamo Sassari, it is the first Semi-Final appearance in international play, having previously reached the Basketball Champions League Quarter-Finals in 2017.

Pallacanestro Varese are the most decorated club among the four Semi-Finalists, with ten international trophies in their cabinet, and will be looking to add a FIBA Europe Cup title, having just missed out on the trophy as runners-up of the inaugural 2015-16 season.

The Semi-Finals will follow the same home-and-away format, with the teams listed first enjoying home-court advantage in the return leg. The two legs are scheduled for April 10 and 17.

The season will conclude with the home-and-away Finals, set to take place on April 24 and May 1. 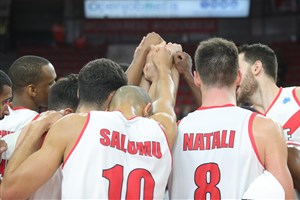