MUNICH (Germany) - Serbia started the defense of their cherished FIBA Women's EuroBasket crown on Sunday with a big derby success against Croatia, while Estonia recorded one of their most famous wins ever.

A special 33-point display from Aleksandra Crvendakic carried Serbia to an 84-66 win on Croatian soil as they had a positive start in Group E of the FIBA Women's EuroBasket 2023 Qualifiers.

The reigning champions also relied on a big second quarter as well as 13 points and 9 assists from Yvonne Anderson. Meanwhile, Ana-Marija Begic fired a team-high 19 points for Croatia.

Estonia caused a sensation as they took a thrilling 72-69 shock victory against Great Britain on a memorable night in Tallinn as they gave the perfect gift to retiring national team legend Merike Anderson in her last game.

Johanna Eliise Teder did the business with 15 points, 7 rebounds and 5 assists and was one of four players in double-digits. Veteran center Azania Stewart had 17 points and 12 boards in defeat.

It means Greece are now at the helm of Group G as their frontcourt got it done again as they jumped to a second win by beating Portugal 64-57. Maria Fasoula recorded 18 points and 12 rebounds, with Artemis Spanou also landing a double-double with 10 points and as many boards.

A stunning display from Emma Meesseman facilitated Belgium's first win of the campaign in Group A as they beat Germany 84-55. She coralled 25 points, 11 rebounds and 5 assists, while Antonia Delaere had a flawless shooting performance for 17 points.  Bosnia and Herzegovina sit proudly at the top of the pool though after beating North Macedonia 80-64. Jonquel Jones was amazing yet again with 30 points and 17 rebounds.

Ukraine dodged a bullet as they went 2-0  with a hard-fought 77-71 win in Finland as the hosts threatened a comeback having been down by double-digits for much of the game. Awak Kuier was on fire for the locals with 25 points and 11 rebounds, but it was not quite enough as Alina Iagupova lit it up for Ukraine with 31 points and 7 assists.

Also in Group B, France got rolling by claiming a comfortable 83-56 triumph against Lithuania, thanks mainly to 14 and 13 points from Gabby Williams and Marine Johannes respectively.

After their tight triumph in Hungary, it was a totally different story for Spain this time around as they blasted their way past Romania 107-52.

Maria Conde continued her rich vein of form with 21 points, 10 rebounds and 7 assists, with Irati Etxarri also scoring 21 points. Hungary now have a win in the bank in the group as they soared past Iceland 115-58, benefitting from the work of twin towers Cyesha Goree who had 27 points and Bernadett Hatar who had 21 points.

Turkey are in control of Group D after they continued their dream start by following up a win in Slovenia with a 52-41 defensive lockdown of Poland. Bahar Caglar Okten top scored with 12 points, while Kiah Stokes pulled down 13 rebounds. Slovenia are up and running as they dismissed Albania 127-28, as Mojca Jelenc claimed 24 points and 12 boards.

Russia is already looking like a dominant force as they posted an unbeaten window by sweeping past Denmark 77-57. Markeisha Gatling came up with the big show for Montenegro to get their first win in the group as she provided her team with 22 points and 12 rebounds for a 70-60 success in Austria.

Despite another great display from Evita Herminjard who dropped 29 points, Switzerland went down 65-50 at home to Slovakia who got their first win as Ivana Jakubcova racked up 16 points and 9 boards. However, it is Italy who lead Group H after shooting down Luxembourg 82-48 with Sara Madera harvesting 16 points.

Belarus needed overtime to get past Netherlands in Group I as they won their second game of the first window 83-72. Anastasiya Verameyenka starred with 23 points and 13 rebounds. Czech Republic are no longer winless after they eased past Ireland 70-54.

Finally, Sweden had a Group J opener to forget in Riga as they had no answer to the brilliance of Latvia center Anete Steinberga who guided her nation to an impressive 89-70 victory. She finished with a standout contribution of 34 points, 13 rebounds, 4 assists and 4 steals. 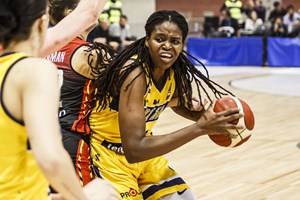 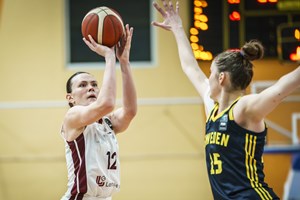