STRASBOURG / VALENCIA (France/Spain) - FIBA Women's EuroBasket 2021 is less than 10 days away and so it's time to check out the second volume of the Power Rankings.

Taking into account the first volume, along with the latest roster updates and preparation games, there are plenty of ups and downs in the list. A third and final volume will be published before the tournament gets underway. 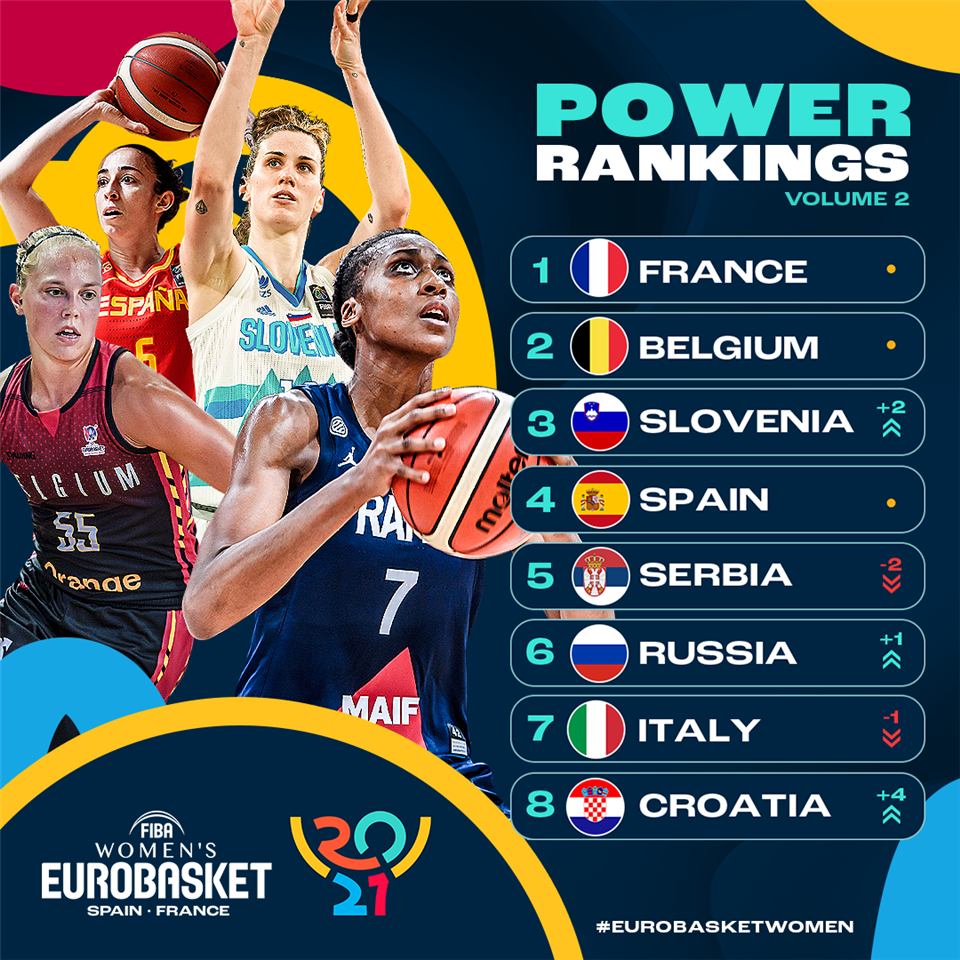 Still firmly on track, France have cemented their status as a serious frontrunner and maybe an outright favorite. They have won preparation games, most notably smashing Spain comprehensively. Even if they have not always been convincing in their victories, they have got it done. Valerie Garnier has announced her lineup of 12 players already and the strength is underlined by highly-rated rising star Marine Fauthoux missing out. Congratulations are also due to veteran standout Sandrine Gruda who recently became the all-time leading scorer for France.

It's been a while since Belgium tasted defeat, but that is what they endured when they were pipped by Spain last week in a thriller. Yet despite this, they manage to hold on to their position because they were without court general Julie Allemand, while the result could have easily gone the other way.  They have also been very stable in the other games. Coach Philip Mestdagh has named his final Cats roster and it looks exciting and well balanced.

So far, so good for Slovenia. If some people's eyebrows are raised that they have climbed into the top three, then that is understandable. However, they have been winning games in preparation, have no known injury issues or absences and have several players in good form. It's looking positive.

Should Spain be higher or lower - or is this about right? That is the question. They could arguably be placed higher after scraping past Belgium and that was a huge win to boost confidence - thanks to the individual brilliance of Alba Torrens. On the flip-side, they were routed by France since the first volume of the Power Rankings was published and that was one of two losses to their rivals. So, that could have pushed them down in the opposite direction. It feels like a big week or so of preparation ahead for Lucas Mondelo and his team. 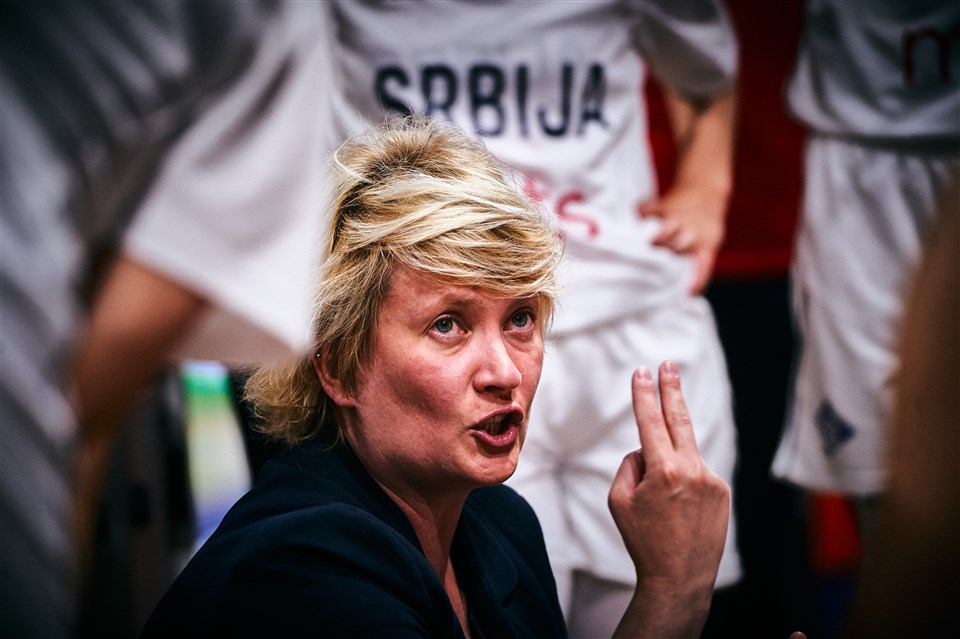 Serbia play-caller Marina Maljkovic is juggling her squad for two tournaments, with the Olympics in July to also take into account

It's been a tricky time of late for Marina Maljkovic who has been juggling her players and trying to balance integrating some new blood with the experienced core. Could we be about to see some changes and new faces? There is also Tokyo to factor in, so in her defense, maybe the experimentation in the prep games was behind losses to Russia, Belgium and Nigeria. They have also won a few as well, but it has been a real mixed bag. Jelena Brooks and Tina Krajisnik look to be in good form though, which is a positive.

It's been a relatively straightforward preparation for Russia so far in that they beat both Turkey and Belarus early and then when they did lose to Serbia, they bounced back to beat their opponents in the second game of a double-header. Maria Vadeeva has been shining, while there could be a new face ready to force her way into the final roster and make a splash in the shape of MBA Moscow forward, Alexandra Shtanko who dropped 19 points on Serbia.

It's a slight fall for Italy on the basis that they did lose twice to France and once really badly - although they took the tournament favorites and co-hosts to overtime in one of those meetings. The other mitigation is that they have been without their marquee player, Cecilia Zandalasini. With her back in the mix now, Italy can still be positive about their prospects.

The biggest risers in this volume and deservedly so. Continuing their great work from the Qualifiers, Stipe Bralic and Croatia continue to get it done during preparation where they have won games against the likes of Montenegro, Bosnia and Herzegovina and Greece. Ivana Dojkic is on fire and continuing to play the role of leader, while Adrijana Cvitkovic has emerged as someone capable of playing some important cameos. 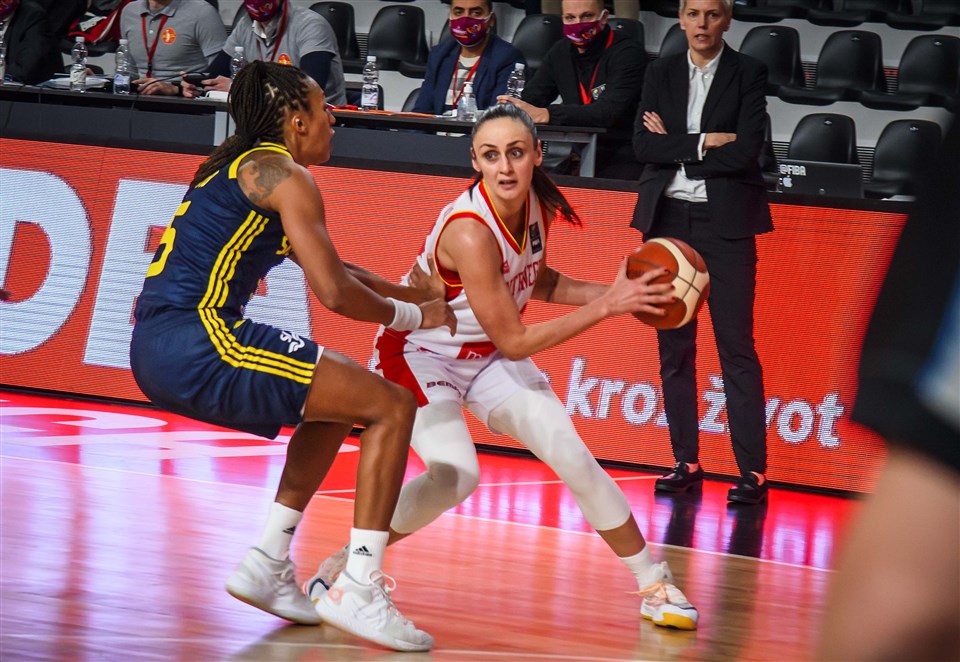 While Montenegro struggled in the early preparation games, they have managed to hold on to their 9th position having completed a win-double against Bosnia and Herzegovina. They also now have Markeisha Gatling on board and she has made a big difference, while Milica Jovanovic is showing her quality too. Now they should be welcoming Jelena Dubljevic back on board as well.

It was a terrible start to preparation for Belarus, who will be without Katsiaryna Snytsina for the tournament and lost some games heavily - including a 30 point plus defeat to Russia. The fall could have been rather more dramatic had Alex Bentley not finally linked up with the team and had they not belatedly took a victory against Czech Republic.

Perhaps Czech Republic can feel lucky to have been moved up. While they've won a couple of games, they have also lost a couple of preparation outings too. However, the justification for their modest rise is that they have shown that without some key players at each end of the floor, they can still get results and this is important. Also Katerina Elhotova has found the hot hand at the right time.  But according to head coach Stefan Svitek, it could be one step forward and two steps back if they keep making individual errors - like against Belarus when they lost a tight one. 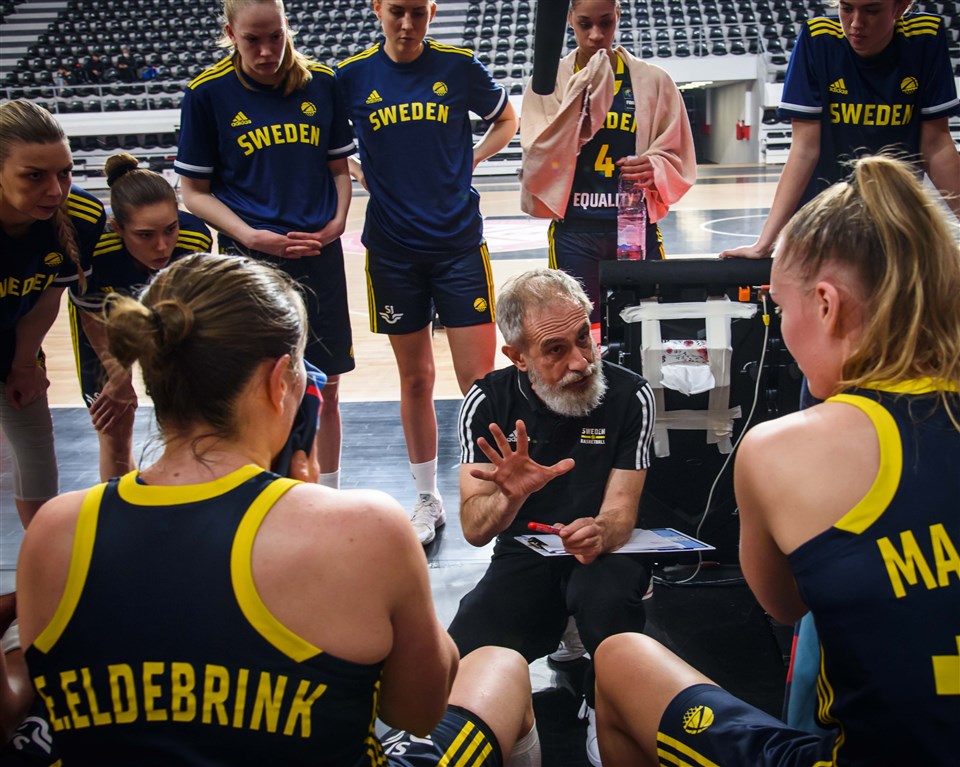 It's looking a little bit grim for Sweden, truth be told. Their well-documented absences clearly don't bode well and they look like a team that will struggle to keep pace offensively. They are going to have to focus intensely to be competitive and in mitigation, they have had tough preparation games, and losing big to France twice was not unexpected. The bonus is that young Matilda Ekh is playing well and could be about to debut at the event.

Yes, you are right. This is maybe a little bit too dramatic a rise after simply winning against Greece. But look behind the result and you will see that they played without most of their big-hitters, including leader Barbora Balintova. Slovakia could be a real fly in the ointment in their group if they continue to use their rugged defense and team ethic to dig out wins - even in the toughest of circumstances.

Why on earth would we raise Bosnia and Herzegovina when they have not yet won a game during preparation? Well, the moment that the Connecticut Sun announced formally that Jonquel Jones was heading to Europe to link up with the team, had to be a huge tick. Especially since if there was any issue with this, then they have Courtney Hurt firing nicely as the other naturalized option. They have also been super competitive in the games, even if they did not get the win, with Nikolina Babic and Milica Deura impressing.

After the emotion and joy of clutching the last ticket to the event back in February, is reality now beginning to bite hard? The momentum and optimism from the last Qualifiers bubbles seem to have evaporated. While they completed a double over a very young Hungary team in their first preparation games, they have since lost to a Slovakia team without most of its leading lights, then went and lost by 20 points to Croatia. Offensively, the lack of firepower looks worrying right now.

It's turning into a bit of a nightmare for Turkey. They lost twice to Serbia, lost to Russia and only just got past a short-handed Belarus. Then, they had to withdraw from preparation games against France. Their injury situation is now in crisis territory after Melis Gulcan and Gizem Yavuz joined Tilbe Senyurek and Isil Alben in being ruled out of the competition. It's not the kind of preparation Ceyhun Yildizoglu will have wanted or needed. Surely things can only get brighter?

*The power rankings are entirely subjective and are in no way a true, accurate ranking system. All comments are purely those of the author.

The FIBA Women's EuroBasket 2021 Power Rankings are put together by our panel, led by FIBA's women's basketball specialist Paul Nilsen. He eats, sleeps and breathes female hoops and is incredibly passionate about the promotion of the women's game at all levels. Paul uses an extensive network of players, coaches, clubs and Federations to shape his work and opinions.

Who could break the Women's EuroBasket single-game assists record?

Who are the young guns to watch at the Women's EuroBasket? 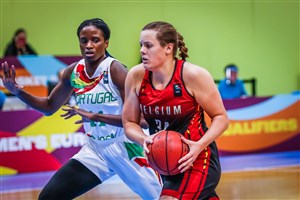 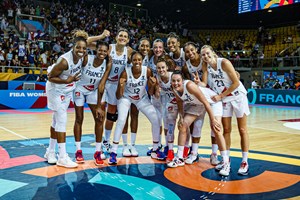 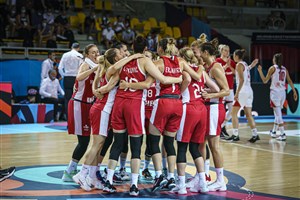 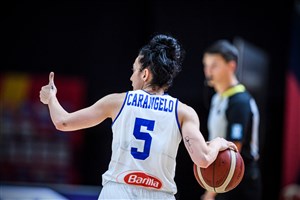 Permutations: Who can advance to the Quarter-Finals?