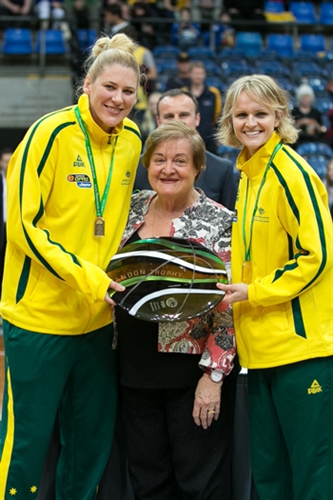 In 2009, the FIBA Oceania Board introduced a perpetual trophy for basketball competition between the national women’s teams of Australia and New Zealand. The trophy has been named in honour of Lorraine Landon, a prominent international basketball identity who is widely recognised as a champion of women’s basketball.

The Trophy was first awarded at the 2011 FIBA Oceania Championships for Women, a three-game series won by Australia.

The Landon Trophy was created by Australian glass artist Jill Yelland. The concept and design for this specially-commissioned FIBA Oceania Basketball trophy was inspired by the FIBA logo and shape of the basketball and created in the colours of the competing nations of Australia (green and yellow) and New Zealand (black and white).