It's with real disappointment that a significant group of Korea players now in the twilight of their respective careers will not get an opportunity to play at what for some, would have been their third successive FIBA World Championship for Women tournament.

Having reached the Quarter-Finals four years ago in the Czech Republic, there was a feeling that, with one or two new additions to spice up the line-up that came in second at the FIBA Asia Championship for Women, Korea could have been a decent contender in Turkey for another top eight finish.

Unfortunately the dual running of the Asian Games means the host nation of that event has chosen to take their veteran core to Incheon in pursuit of what looks to be a certain gold medal.

That has resulted in the National Federation having to dig deep into what is a worryingly shallow talent pool to field another team for Istanbul.

The outcome is that Korea will go up against Australia, Belarus and Cuba with what will be the youngest team in the competition by far at an average age only just over 23 years.

Their kingpin will literally be a school girl in the form of Ji-Su Park - accurately heralded as the future of women’s basketball in Korea. When National Federation President Yul Pang bemoaned that watching her mature on the court was like watching a tortoise because they did not want to fast-track her to the senior team, he probably didn't envisage a scenario where she would actually leading the nation when still aged just 15-years-old.

It is an incredible story and Park has shown at the FIBA U17 and U19 World Championship events just what a force of basketball nature she is in the paint. She will be the central figure of this young team which is almost exclusively made up of players who have stepped out at youth level only.

The lack of experience is supported by the fact that the entire team will be making their debut in the FIBA World Championship for Women.

Not that Park will be fighting a lone battle as Seungah Lee played in Bangkok last year and so knows what it takes at senior level.

The same can be said for Youn Joo Kim, who has been brought in from the cold having featured at the Asian Championship in 2011. She was terrific at the William Jones Cup recently which Korea used as part of their preparation programme and averaged more than 12 points per game.

Korea have shown glimpses of being able to compete, but stepping up to the big stage in Istanbul and actually putting together 40 minutes of consistent basketball to merely be competitive looks like being the primary goal at this juncture.

Anything more than this would surely be an unexpected bonus for this extraordinarily young team. 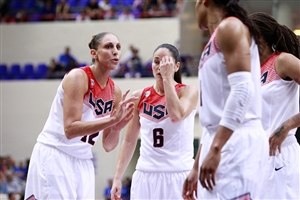 USA make changes after being stung by France