MUNICH (Germany) - Switzerland needed to win by 20 points and were even down by a further 8 at one point in the game against Iceland, but managed to crawl out of the hole, all the way to a 109-85 win to advance to the FIBA EuroBasket 2021 Qualifiers as the Group H winners.

Iceland were up 29-21 late in the first quarter, meaning they had a 28-point lead in the live standings of the group at the time. But Switzerland powered through to take a 54-47 lead at the half, and got it up to 77-66 after three quarters.

It was a signal for a packed Salle Omnisport Du Pierrier to go crazy, and as the Swiss flags were rising high in the stands, Clint Capela dunked it down to get the gap to the magical 20-point mark with seven minutes to play.

The Pancake King is bringing that JAM. Monster plays by @capelaclint! 🥞👑 #Eurobasket

Iceland were trying to get back under 20 the rest of the way, but as Roberto Kovac and Jonathan Kazadi knocked down big shot after big shot, it became clear that Switzerland were going to shock Iceland and advance.

"Switzerland wanted it more tonight. We were not focused and dedicated enough to win this game here in front of a crazy crowd," Martin Hermannsson, Iceland's top scorer with 28 points, said after the game.

For Switzerland, Kovac finished with 29 points on 10-of-19 shooting from the field, Kazadi had 21 and 9 assists, while Capela collected an 18-point, 15-rebound double-double. Switzerland, Iceland and Portugal all finished on 2-2 records in the group, but Switzerland's +12 points difference took them top of the group, Iceland finish second with +4, with Portugal last at -16.

"I think we believed the entire game. Kovac was on fire in the first half and we could capitalize on it during the second half by staying focused until the end of the game. We stayed focused until the last second and that sent us to the next round. The fans were fantastic!" Kazadi was delighted in celebration.

"We scored 32 points in the last quarter, which is a big performance in order to grab the qualification for the next round," Swiss coach Gianluca Barilari added.

A 20-point win was needed for @Swiss_Basket 🇨🇭 to advance to the #EuroBasket 2021 Qualifiers. @CapelaClint and the boys delivered. pic.twitter.com/KLmyYdCcVS

Meanwhile, Romania won Group F and advanced to  Group A of the Qualifiers with Israel, Poland and Spain.

Slovakia had a chance to make life difficult for Romania, and clinch first spot with a win by 18 points on the last game day. They seemed to be on their way to doing so, as they opened up the game with an 11-0 run, but Romania were quick to respond, with a 28-9 second quarter seeing them take the lead for good.

In fact, it was Romania who owned a 17-point lead in this game, and a 77-74 win made sure they swept Group F. The second unit got the job done for Romania in Eurovia Arena, as Bogdan Popa and Radu Paliciuc combined for 27 points off the bench.

It was raining three-pointers as @jround3 shot 67% (4/6) from outside the arc to record 12 debut points! ☔️#BritishBasketball pic.twitter.com/I2a3NtG9QQ

Elsewhere, Great Britain defeated Luxembourg 93-65 with 12 points on 4-of-6 shooting from beyond the arc by their 19-year-old Jacob Round, who needed just 13 minutes of playing time to get in double digits. Denmark won 68-57 in Albania to join Great Britain and Romania as the third team with a perfect record in the FIBA EuroBasket 2021 Pre-Qualifiers.

Denmark will play Belgium, Czech Republic and Lithuania in Group C of the Qualifiers, while Great Britain set up dates with Germany, France and Montenegro. 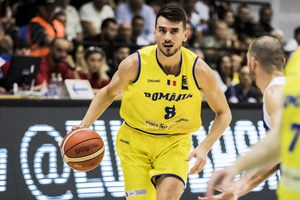