MUNICH (Germany) - Iceland are keen on playing close games throughout FIBA EuroBasket 2021 Pre-Qualifiers, and Martin Hermannsson played the role of the hero, sinking the game winner against Switzerland who got another big game out of Clint Capela.

Switzerland owned a one-point lead with 5.6 seconds left to play, but Iceland coach Craig Pedersen decided that the scene was perfect for a Martin Hermannsson moment. And his guard delivered, sinking a long two with 0.7 seconds to go and Switzerland out of timeouts - all they could do in the remaining time was launch a shot full court and watch it miss the target, as Iceland collected an 83-82 win on the day.

What a way to win it for @kkikarfa in the #EuroBasket Pre-Qualifiers! 🙌🙌🙌 pic.twitter.com/JNzQYjK9fD

"For me personally, it was great making the winning shot here in Laugardalsholl for the first time, and doing it in front of friends and family is unbelievable," Hermannsson said after sending the packed stands into a frenzy.

"My first reaction is that this doesn't get any better. It was important to finish this and now this means we are still in the running to win the group. If we would have lost, it would have meant we were out. This gives us confidence and hopefully the spark to go and finish this."

The entire Group H is now tied at 1-1 after dramatic games in Switzerland, Portugal and Iceland since the start of the Third Round.

"The game in Portugal was like this one, but then we came up with a one point loss. But that's the way this goes sometimes. Everybody is extremely happy that we won this one and we need to enjoy it and then on Monday we need to refocus on the job next week," Iceland coach Pedersen said.

"Now everyone has one win. We go on for a three game championship and everybody wants to win," Switzerland playcaller Gianluca Barilari summed up the craziness in the battles for the only ticket to the FIBA EuroBasket 2021 Qualifiers from this group.

Hermannsson scored 16 points on 5-of-9 shooting from the field for Iceland, who got 18 points from Jon Axel Gudmundsson and Tyrggvi Hlinason each. Jonathan Kazadi scored 23 for Switzerland, with Clint Capela getting 13 points, 7 rebounds, 5 assists and 5 blocks, but shooting just 5-of-14 from the field on the night.

Another big man also did a bit of everything for his nation on Saturday night, but did emerge victorious at the end of 40 minutes. Emanuel Cate hit select all and copy for his performance against Cyprus, and then pasted it to the game against Slovakia, shooting 7-of-8 from the field again, getting a double-double and collecting an efficiency of 34.

Cate had 15 points, 15 rebounds, 4 assists, 2 blocks and a steal, taking Romania to an 85-68 win over Slovakia. The win boosted Romania to 2-0 in Group F, Slovakia dropped to 1-1 with a big deficit to chase if they want to overtake Cate and company in the battle for the top.

"This is not done, as a player and as a coach I played many games in which even bigger differences were cut down," coach Zan Tabak still believes Slovakia can finish ahead of Romania and Cyprus.

Along with Romania, two more teams are at 2-0 after the first round of games. Denmark are still enjoying Gabriel Lundberg's fine form, as their guard scored 23 points with 10 rebounds, 4 assists and 0 turnovers in a 95-73 win over Albania in Group E.

"I always tell my players that we have to play hard and smart. In this game we played hard, but not always smart," Albania head coach Afrim Bilali said after the game.

Great Britain used their usual suspects to defeat Luxembourg 71-54 to join Romania and Denmark at 2-0. Myles Hesson had 22 points and 8 rebounds, Gabe Olaseni had another double-double with 12 points and 13 rebounds, Teddy Okereafor finished with 10 points, 7 rebounds, 4 assists, 3 steals and a block for GB, but Luxembourg will feel like they missed a great chance to pick up a win in Group G.

"We should be proud for playing 30 minutes of high level basketball and staying with GB. That's our next step as a team, 35 minutes, 40 minutes, then eventually to compete for the win," Thomas Grun said, trying to explain an forgettable 23-2 last quarter from Luxembourg.

Teams will be back in action on Wednesday, with the game of the day being in Sines, Portugal. The hosts are up against Switzerland, chasing not only a win, but also the 5-point deficit from their first game. 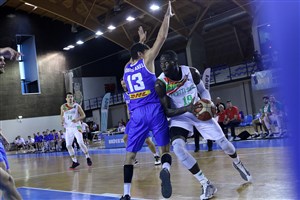 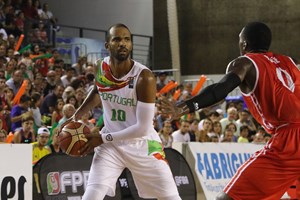