MUNICH (Germany) - The showcase game of the first day of the FIBA EuroBasket 2021 Pre-Qualifiers, the clash in Group G between Switzerland and Portugal, lived up to its billing. A full house in Fribourg came to see Clint Capela's first game for the national team in four years and went home satisfied with the home team winning the Third Round opener 77-72.

The Houston Rockets big man was in full force, finishing with 16 points and 11 rebounds in 26 minutes of action, but it was Dusan Mladjan who scored 21 points and gave the Portuguese defense almost as much trouble as Capela.

"The experience of playing again for my country in front of this public was amazing. We brought a lot of energy and toughness. It wasn't easy at the beginning of the match, they came out hard but reacted well and I can say that today was a good day", said Capela who shot 66 percent from the field, and had just one turnover.

"I didn't feel the pressure actually, I just played at my best and I'm grateful to have the opportunity to be on the court with my teammates."

1⃣ game down, 3⃣ to go for these sides. Who will punch their way to the #EuroBasket 2021 Qualifiers? 🧐

The Swiss certainly should feel lucky to pull this one out. Portugal had the lead most of the time, but the host eventually came to the top. Their biggest lead came at the very end (77-71), just before Diogo de Costa Ventura made one of two free throws to make the final score.

"I think we played a good first half, but in the third quarter we didn't put the same energy and they took advantage of it, especially on the offensive boards. At the end of the game we came out big and we found a way to manage the key possessions which brought us the victory," explained Switzerland's head coach Gianluca Barilari.

With this win Switzerland will have a comfortable wait for the upcoming game in Iceland next weekend, while Portugal will have an extra imperative to win the game against the Iceland side this Saturday. Meanwhile in Bratislava, Slovakia went got off to a perfect start in Group F by defeating Cyprus 67-60 in dramatic fashion. In a defensive affair Cyprus fought to the bitter end and almost got away with the surprise win.

A Ioannis Giannaras three-pointer gave the lead to the visiting team with 3:21 to go, but no one at Eurovia Arena imagined it was not just the last lead, but the last basket Cyprus scored that evening.

Slovakia went on an 8-0 run to seal the first victory and an important moral boost for Zan Tabak's side before a vital game against Romania in Ploiesti next Saturday.

The Slovaks celebrated two heroes of the day. Vladimir Brodziansky had 23 points and 12 rebounds, while Richard Korner was pretty effective - 11 points and 8 rebounds in less than 14 minutes, but he was the man who scored the layup when the game was on the line.

Belarus justified their role as favorites of Group E by storming through Tirana with a comfortable 73-51 win over Albania. The Belarus frontcourt was just too much for the Albania side, with Artsiom Parakhouski dominating under both rims with 14 points and  10 rebounds, while Maksim Salash added 16 points and 10 rebounds. With Great Britain enjoying the status of favorites in Group G, the game between Luxembourg and Kosovo was of vital importance for both teams. Faced with such pressure, it was the hosts who had the stronger nerves.

Luxembourg prevailed with an 88-80 win and left Damir Mulaomerovic's side with a lot of worries before hosting a strong Great Britain side in Mitrovica this Wednesday.

Alex Laurent led Luxembourg with 22 points, and on other side Dardan Berisha led all scorers with 23 points, but he needed 21 shots to do so. 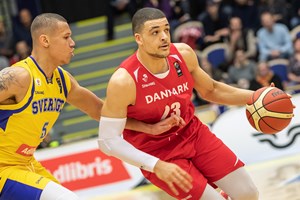