MANAGUA (Nicaragua) – David Jackson's 20 points, 5 rebounds and 5 assists were just one of many dominant performances as Minas cruised past the defending champions, Quimsa. Minas claimed a spot in the Basketball Champions League Americas Semi-finals with their 87-60 win on Saturday evening.

A low scoring first quarter, Minas held Quimsa to just 11 points, while only scoring 17 themselves with David Jackson netting 8 points along with 2 assists. Ismael Romero kept Quimsa in the game with his 5 points and 5 assists through the first quarter.

Minas dominated the second quarter, scoring 30 points to Quimsa's 14, with Shaquille Jackson scoring 9 while Felipe Araujo scored 7 points while also bringing his boards total to 4 rebounds – all while scoring all of his 7 points in the second quarter alone.

Leonardo Mainoldi contributed 5 points in the second quarter to try and keep Quimsa in the game, but the fast-paced Minas offense was too much for the Quimsa defense to stop, ending the quarter behind by 22 points.

For Minas, three different players had 14 or more points by the end of the third – Gui Carvalho, Johnson and Jackson made up over half of their team’s 69 points, Carvalho also grabbed 7 rebounds.

One last push for Quimsa saw them outscored by Minas 18-13 in the final ten minutes of play, with Minas extending their lead to 27 to finish the game. Romero was the only player on Quimsa to score in double digits, ending the game with 16 points and 9 rebounds, leading the team in both categories.

Minas will now play the winner of the Real Esteli and Sesi Franca matchup, with the winning team’s semi-final taking place on Sunday afternoon. 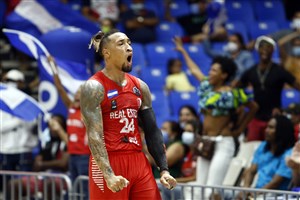