Portrait in action: How does sturdy Thirdy of the Philippines excel on court?

MANILA (Philippines) - If the wider international basketball community didn't know much about Philippines guard Thirdy Ravena  before the second window of the Asian Qualifiers for the FIBA Basketball World Cup 2023, it sure knows about him now.

Ferdinand Crisologo Ravena III, aka "Thirdy", is the younger brother of fellow Gilas guard Kiefer Ravena. A 1.89m (6ft 2in) dynamo, Thirdy had a couple of brief and non-descript appearances in the Asian Qualifiers for the last FIBA Basketball World Cup but a few years and a lot practices and games later, the 25-year-old is a more mature and dangerous player. He's a great example of how the qualifiers put unheralded talents on stage

On the books of Japanese B. League team San-en NeoPhoenix, Ravena was unflappable against Indian and New Zealand.

Guards simply must be able to knock down shots from behind the arc in international basketball. Thirdy does! He hit four step-back 3s, and a catch-and-shoot 3, in the window.  His 5 of 12 (41.7%) shooting is accuracy most coaches would settle for.

Scoring inside the arc

Thirdy got out of the gate fast after his teammates came up with steals and scored buckets in transition, but he also beat defenders off the dribble and had a knack for finishing. Alert to his 3-point shooting prowess, the Tall Blacks pursued him on the perimeter but he blew past them for layups. Thirdy's  footwork allowed him to spin past defenders. He was a combined 10 of 20 from 2-point range.

Ravena may not be a typical pass-first point guard yet he did well when running into double-teams, or traffic, by locating open teammates for jump shots or drives. Ravena had seven assists during the window.

Thirdy had just one steal against India but five against the Tall Blacks. Against the former, it was a simple case of moving his feet and reaching in to knock the ball away. Against New Zealand, he jumped into the passing lane to get a steal, came up with three more after deflecting passes and claimed yet another by pouncing when Hyrum Harris carelessly dribbled in front of him.

This might be Ravena's most impressive play of the window. Tall Blacks star Dion Prewster thought he had a showtime dunk early in the fourth quarter with his team up 19 but Ravena sprinted back, timed his jump to perfection and rejected the New Zealander just as he began to take the ball forward to jam it.

Thirdy is not the finished article. He endured a woeful 3 of 10 display at the free-throw line against the Kiwis.

"I still need to work on my free-throws a lot more," he admitted. " Free-throws can cost a game... it's one point and one point can make a whole lot of difference in a game."

Overall, his coach, Chot Reyes, was encouraged by the play of Thirdy, who had 23 points, 5 assists, 5 rebounds, 5 steals and 1 block against New Zealand.

Reyes said: "Yes definitely [impressed with Thirdy and  Dwight Ramos], not only with their stats and points but in all aspects of leadership, their work ethic, the energy they bring to practices, everything that's important for leaders." 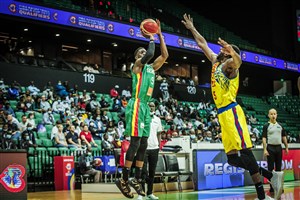 MVP of each nation in Window 2 of the African Qualifiers

5 young young guns in Window 2 of the African Qualifiers 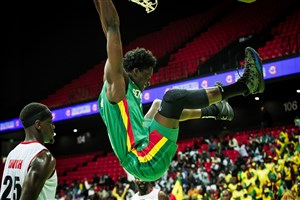 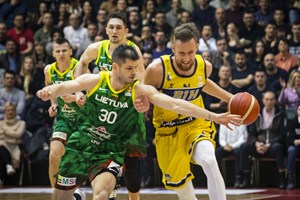