And the Egyptian’s side point guard, James Justice Jr. wants it to be a loud one.

In a clash of style, the Egyptians are looked upon as the underdogs. As they are looking to become the third team from the land of the Pharaohs to lift the trophy – since Gezira in 1998 and Al Alhy in 2016 – Smouha SC will count on their 1.77m (5ft11in) playmaker to reach their aim.

"PRIMEIRO D’AGOSTO ARE CONSIDERED A VERY STRONG TEAM AND WE WOULD LIKE TO DEBUNK THE MYTH TONIGHT.”- Justice Jr

"It’s a good thing we’re considered as underdogs. I’ve been feeling that way throughout my career and that suits me,” James Jr. said.

Fact is, Smouha Sporting Club have some valuable arguments to oppose to Primeiro D’Agosto’s experience and style of play.

An impressive average of 91 points per game as opposed to the Angolan’s 77.5, gives Smouha confidence.

The American guard went on saying: "If we win, it would be a huge statement to Africa, saying we’re here. Primeiro D’Agosto are considered a very strong team and we would like to debunk the myth tonight.”

After clocking in five wins in a row, Smouha SC will be looking forward to adding another one in Luanda. "This is what it’s all about. We’ve set up a plan and we’re definitely looking to score more," reckons Justice Jr. who sports an average 18.4 points per game.

Some time back, Nigeria’s Augustine Okosun stated that Smouha SC had the perfect mix to lift the trophy on Sunday. Justice Jr. sees things this way too.

"I totally agree with what he said. We have all the talent that we need, with an excellent backup for every position. And it’s a perfect balance on the pitch."

If confidence levels are high, the only barrier to a victory tonight might be the team themselves. "If we might have a weakness, it would be the limitations we impose on ourselves. That’s all," he noted.

A perfect game tonight would definitely see him get closer to the FIBA Africa Basketball League MVP Trophy, even though he has not set eyes on the individual prize.

"I’m not playing for the MVP title. I’ll be playing like I play every time I get on the court. If the title comes to me, I’ll be happy. But it’s all about the team," Justice Jr. concluded. 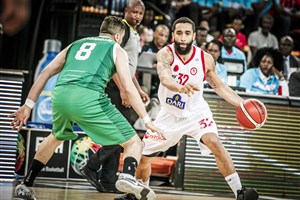