TAURANGA (2015 FIBA Oceania Women's Championship) - The experience of Suzy Batkovic and Laura Hodges has guided Australia past an inspired New Zealand, 80-63, in Tauranga on Monday.

The win sealed the FIBA Oceania Women's Championship for the Opals and secured a place in their sixth consecutive Olympics next year in Rio.

Hodges (22 points at 64 per cent, 5 rebounds) and Batkovic (17 points, 5 rebounds) stood resolutely between the Opals and a monumental upset as the Tall Ferns produced one of their best ever performances, the experienced pair making a string of big plays.

“Suzy and I have played together for a very long time and I think we work well together,” Hodges said.

“It’s nice to be play with someone like that, we know each other’s roles and we can just run with it, especially in those crunch moments.”

Micaela Cocks was the chief mischief maker, delivering a superb 21 points on 50 per cent shooting to go with 7 boards, while Penina Davidson (8 points, 12 rebounds) was a standout inside against her bigger rivals.

“I couldn’t be prouder of the girls, it’s a bit of a consolation prize but our team had one WNBL player, playing against a team of 12 WNBL players and we were in it for 95 per cent of the time,” New Zealand coach Kennedy Kereama said.

“From where we were last Oceania series, with some pretty experienced players at the time, I think we’ve definitely made some moves forward.”

Game 2 started just like its predecessor in Melbourne, rushed, physical and full of mistakes, with Australia grabbing an early lead.

But soon enough things clicked into gear, the Tall Ferns upsetting their more fancied rivals with some switching defenses and a relentless attack at the basket at the offensive end.

With the score tied at 14 after 10 minutes, the game went up another level in the second term, Cocks simply in everything, scrambling on defense, setting up teammates with poised point guard play and giving New Zealand the lead with yet another strong drive into the tall timber.

Batkovic was inserted back into the contest and immediately restored Australia's lead, her spin move to the non-preferred right hand a highlight.

As she did all night Cocks answered, a pair of triples bringing the Kiwis close, before Rachel Jarry's buzzer-beating three-pointer gave the Opals a 40-33 edge at the main break.

The New Zealand crowd brought their A-game in the third quarter and the Tall Ferns responded, but Batkovic again turned the tide with a jumper and a clever assist to Hodges.

A controversial shot-clock violation denied two important points to Cocks and the Opals pounced, generating quick baskets from their defense to skip 13 clear.

Some more Cocks magic stopped the rot and kept the damage to 11 at three-quarter-time, 58-47, and when the WNBL champion opened the final term with another long bomb the crowd dared to dream.

The Tall Ferns lost no friends with way they fought throughout the game, but the Opals withstood a stern examination to claim the win, the 2-0 sweep and direct qualification for Rio.

“I forgot about that until about 10 minutes after the game and then I thought to myself, ‘We’re going to Rio’.” 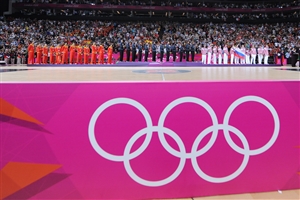