Tears of joy for Slovakia and Greece, despair for Hungary and Latvia

MUNICH (Germany) - There was a sharp contrast of emotions for a number of nations on what proved to be a roller-coaster and absorbing last day of the FIBA Women's EuroBasket 2021 Qualifiers.

With eight tickets already taken and half of the Final Round field still to be filled, a number of dreams were made and broken. The most dramatic contests saw Slovakia and Greece both make it.

Slovakia claimed their place as Group H winners as they got the double-digit win they needed against Netherlands, who saw their own hopes go up in smoke.

There were scenes of jubilation on the final buzzer as Slovakia registered a 61-50 success in a dogged team effort, with Angelika Slamova and Miroslava Prazenicova sharing 22 points.

Meanwhile Latvia had looked dead and buried in Group I, but thought they had managed to take the last ticket available for the Final Round as they sealed the runners-up spot.

Needing a big victory to gain the necessary basket difference to potentially progress, they amassed a 78-57 win against Germany, with much of their best work coming from Anete Steinberga. The center finished with 21 points, 11 rebounds and 4 assists, while Kitija Laksa came up with 17 points and 6 rebounds.

That result extinguished the hopes of the watching Hungary, with Latvia's destiny in the hands of Greece, who were stepping out in the last game of the day, needing an 18-point win against Bulgaria.

In an epic roller-coaster, they eventually rode out 73-55 winners, with an 'and-one' basket with 12 seconds remaining from Maria Fasoula sealing the deal and sending them through at the expense of the distraught Latvians. Angeliki Nikolopoulou was also highly influential for Greece with 9 points, 9 rebounds and 7 assists.

Earlier in the day, Belarus were the first nation to claim their spot as they avenged Wednesday's loss to Poland by beating their rivals 80-49 and topping Group F. It was a strong team display with Tatsiana Likhtarovich the pick as she posted an all-action 11 points, 6 assists and 5 rebounds.

The long and proud tradition of Russia making the Final Round is secure they booked safe passage with a comprehensive 103-47 win over Switzerland. Maria Vadeeva was on fire and finished with 25 points, 11 rebounds, 5 assists and 4 blocks  to make sure her side finished top of Group C.

Czech Republic booked their place as they claimed top spot in Group D via a comfortable 84-63 victory over Denmark. Veronika Vorackova starred with 13 points, 8 rebounds and 4 steals.

Montenegro picked up a ticket to the Final Round with a 78-52 triumph against Israel as they cemented being runners-up in Group B . It was founded on a string of excellent displays, including a smart 16 and 15 points from Milica Jovanovic and Markeisha Gatling respectively, plus 13 points and 8 assists from Bozica Mujovic.

Similarly, Italy sealed second place in Group D to move to the Final Round, but had to work hard to attain an  81-66 victory against Romania. Francesca Pan scored 17 points and her backcourt partner Nicole Romeo added 15 points and 5 assists.

Elsewhere, there were wins for Bosnia and Herzegovina who soared past Estonia 78-52 to take second place in Group B, while Serbia overwhelmed Lithuania 96-61 to finish unbeaten in Group E.

Slovenia and Belgium also also posted flawless campaigns, the former gliding past Iceland 96-59 in Group A and Belgium avoiding a surprise loss to Portugal as they won 69-66 in Group G. Ukraine also beat Finland 91-75 to finish second behind Belgium, but were not one of the best five runners-up and won't get to play at the Final Round. 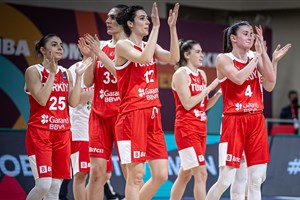 Which second-placed teams qualified to the Final Round? 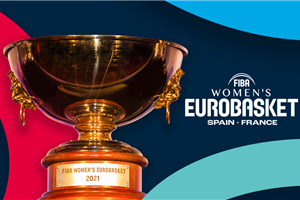 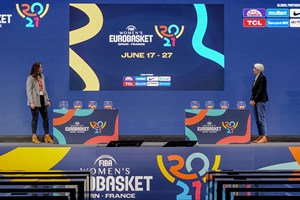 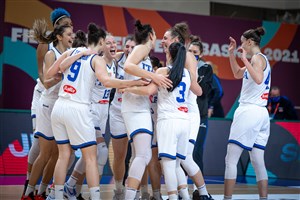