WNBA champion Loyd ready to be crowned a Worlds trailblazer

The celebrations from Seattle’s recent WNBA title success have barely ended and yet Loyd is already closing in on another major line for her resume and a significant note in basketball history.

Back in 2014, Loyd lifted the FIBA 3X3 World Cup in Moscow and that means she could now become the first ever player to complete a Worlds double -  if USA manage to top the podium in Tenerife next weekend.

“I actually hadn't thought about it before, but it would be pretty awesome to have that against my name and for the USA too – it would be super special,” enthused Loyd, who quickly re-enforced her love for 3x3.

“It is a very different kind of game and I grew up playing it when I was a kid, because it’s where you start off playing – in the parks.

“It’s so exciting because the fans are very engaged and it is a much quicker game. 3x3 really exposes all of those one-on-one elements in the game and it’s both exciting to watch and has that quick shot clock,” she added.

Perhaps Loyd may be able to compete in both events when Tokyo 2020 arrives and certainly the addition of 3x3 to the Games brought a big thumbs up from the WNBA star. However, you can’t blame Loyd for having all eyes on the FIBA Women’s Basketball World Cup as she has had to show a lot of patience to finally get the nod at a senior tournament – some eight years after playing for USA at the U17 Worlds.

"It's really special considering the journey I have been on with USA basketball and going to all the different camps and then being invited,” smiled Loyd.

“The only thing I could ever control was my effort and I just kept putting in the work. I had to trust that process and put myself in a good position to make the team - and it has paid off.

“You always have that little doubt, because there are so many good players and everyone has a chance and so I am just thankful to be selected.”

Loyd is in familiar company inside the USA locker room, since she will get to play with fellow WNBA champions and Storm colleagues Breanna Stewart and Sue Bird.

She won that U17 title back in 2010 alongside Stewart, while veteran star Bird is someone she continues to look up to – as well as another legend in Diana Taurasi.

"They are definitely legends of the game and also off the court as well,” stressed Loyd.

“You just have to look and see how they take care of bodies and how they are super professional – so of course all the younger players look up to them.

Harry A. Gampel would approve 🐶🇺🇸

“I am spoiled as I get to also hang out with Sue during the club season and she is a phenomenal leader and I have never encountered anyone else with that level of knowledge of the game.

“It’s an honor to be their team-mates,” she concluded.

And, with Bird looking to become the first player in history to win five medals at the FIBA Women’s Basketball World Cup, Stewart having taken the WNBA MVP and Finals MVP accolades, it could turn out to be quite a calendar year for Loyd and her Seattle team-mates. 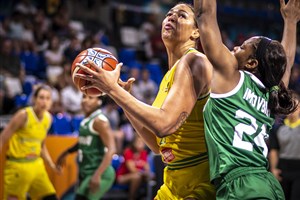