.@USABasketball become the first team in history to reach 10,000 #FIBAWWC points with the basket of @BrittneyGriner against Belgium! Congratulations 🇺🇸👏 pic.twitter.com/haCirvPN4k

The 6ft 8in (2.03m) center achieved the feat for her country - the first-ever nation to reach the landmark - in the opening seconds of the Semi-Final success against Belgium.

"If I ever go on Jeopardy, I'll definitely say my name in response to 'What is Brittney Griner known for? Scoring the 10,000th and 10,001st basket for the USA in the Women's Basketball World Cup," she said laughing.

"That's awesome. That's a lot of scoring on the part of the USA, so I'm just glad I could be part of this."

Now looking forward to Sunday's Final, Griner was quick to praise Belgium for the way they pushed USA hard before her team eventually eased out of sight to take a 93-77 triumph.

"It was a good game and there's no easy ones now," she stated, ahead of finding out who USA will play in the title game. "I mean the whole tournament hasn't really been easy - honestly. We've been getting everybody's best shot.

"Belgium came out on fire and it was close the whole game. We started to pull away at the end so I'm very proud of the team."

Looking ahead to Sunday's Final, Griner only expects it to get tougher, as USA will face either tournament hosts Spain or World No 4 team Australia.

"Both teams will be very hard," she said. "Spain here at home, or Australia, who we've seen a lot and I would be going up against my Phoenix Mercury coach (Sandy Brondello). It will be a tough game either way it goes and we're just going to have to bring it."

Griner was also acutely aware that all eyes could be now focused on a possible heavyweight match-up under the rim with the in-form MVP favorite, Liz Cambage - if the Opals make it.

"Liz has been killing it and it's funny, because we're good friends and we root for each other all the time," she revealed. "So, when we go up against each other, it's always a battle. I think everybody wants to see that match-up of two bigs - two of the biggest players going against each other and I think it would be good for basketball." 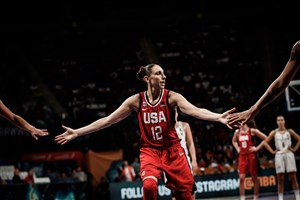 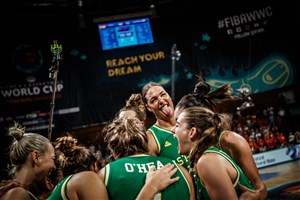