TENERIFE (FIBA Women's Basketball World Cup 2018) - A frontrunner to be crowned MVP in Tenerife, Liz Cambage has lifted the lid on dunking and the need for the women's game to be given some respect.

The Opals center has been sensational throughout the FIBA Women's Basketball World Cup 2018 - with her team heading into the last day of the tournament with a mission to upset USA and cross the finishing line first.

Often the center of attention, Cambage was certainly radar-central in the Semi-Final against Spain . Not only for her eye-popping numbers, but also for getting fired-up through some animated interactions with the partisan locals.

"I've always said 'screams from the haters got a nice ring to it'. That's the stuff that gets me going and I love it," said Cambage after she posted an outstanding double-double to propel her nation to only their second-ever Final. "But I've so much respect for Spain. I love this city, I love this island, I love this country. They go hard for their country and I respect that.

"It was tough. We knew it was going to be a hard, hard 40 minutes going into this game and it was. They (Spain) are a group of superstars - we just came up with it in the end. We played our hearts out and left it on the court."

What went down against Spain as Cambage continually gestured to the crowd was perhaps towing the line and maybe even crossing it for some. But for the player herself, it was clearly part of the spectacle, part of the entertainment and certainly helped draw some added interest to the event.

Indeed, Cambage is adamant that women's basketball in general is in need of attention and claims those who are quick to criticize, need to look in the mirror at their own potential shortcomings.

"I have always said that many people who don't respect the women's game are probably guys who played in high school and never made it," she stated. "If you have a negative ideal about women succeeding in sport, it comes from your own insecurities. That is what a lot of internet hate (for female athletes and women's sport) is. It's people projecting those insecurities.

"The women's game doesn't have the same athletic ability as men, but our game is more tactical and based on the precision of running plays, team work and it is just a totally different game. We still put on a show and I know some people who would much rather watch a women's game."

Part of the added appeal is that Cambage has attracted mainstream audiences for her not only her forthright opinions, but also her dunking ability.

She famously threw one down at the London 2012 Olympics and fans are looking forward to seeing if she can possibly sign off her participation in Tenerife with another.

"Nothing I ever do on the court is planned. Everything I do is always in the moment," she revealed.

It is clear that Cambage won't be out to do something for the sake of it. Or, because everyone else is clamoring to see it. What is interesting, is that she is encouraging young and  aspiring female dunkers to be bold and give it a try at the earliest possible time.

"You have to keep trying until you get it," said Cambage. "Growing up as a teenager, I was always really scared of doing it. I don't know why I was so shy knowing that I could dunk when I was 16-years-old.

"For me, the earlier you start dunking, the quicker you're going to get it and I wish I had started even earlier and had done it more and more.

The advice is that as soon as you practise anything - you're going to get better at it, so go for it," stressed the Opals' standout.

On the subject of dunking, Cambage will now match-up against someone else who is famed for her ability to get above the rim - Brittney Griner. She flushed it down at this event four years ago in one of the Top Plays at the event.

The clash with USA promises much for the fans and this is a match-up everyone wants to see as the Australian centerpiece gets ready to take her first Final footsteps at the event.

"This is what we dream about as little girls growing up - gold medals. America has a lot of them," she said. "We won our first (Women's World Cup) in 2006 and we're still chasing it again. I'm sick of bronze. I've got a few bronze medals and I'm sick of it. I want a gold one. I want a different medal - so that's what I'm chasing after.

"But, it's another hard match and that is what these tournaments are about. Another group of all-stars with Team USA. It's going to be another difficult game, but I think we can give it a red-hot go.

"I love my girl 'BG' (Brittney Griner). We hang out away from the game and people want to watch us play. I have so much respect for that girl," smiled Cambage. 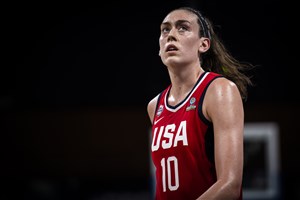 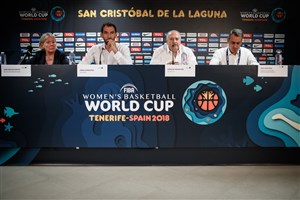