SURINAME (FIBA Women's AmeriCup 2019) - Cuba started strong in the FIBA Caribbean Women’s Championship 2018. They secured a solid win of 77 - 50 against Bahamas in group A of the  preliminary stage. They created a head start in the first quarter by dominating the game and creating a lead of 18 points. Bahamas held their  ground and improved their scoring in the following quarters. Bahamas did force more turnovers but not all of these were converted to points.

Ansisleidy Galindo of Cuba had a strong game by scoring 24 points for her team followed by a good performance of her teammate Yamara
Amargo (15 points ) and Suchitel Avila (12 points).

The last 10 minutes of the game was an endurance test which Cuba was determined to win, Bahamas couldn't remove the deficit and
eventually saw the match points going to the opponent. Valerie Nesbitt of Bahamas came from the bench and clinched 19 point in total. She
got support from Brea Forbes (14 points) but they both needed more to secure a win.

Cuba have their first match points but they still need to face St. Vincent and the Grenadines in their group. Tomorrow will be an interesting day.

It was a dominating performance of team Barbados against Guyana, the final score was settled at 39 - 79. The women of Barbados were
physically stronger, and they used that to their advantage. The coach admitted that he was expecting a tougher match and the final score was
beyond his expectation. Top performer was Toni Atherley with 19 points and backed up by Shakila Small who also had a solid performance with
16 points.

Within the first 2 minutes Guyana saw the lead going to Barbados and after the first half of the game Guyana was 18 points behind, they never
recovered from this. The majority women of Guyana lack international experience, and they weren’t a match against the more experienced
opponents. Miriam Mc Kenzie had a very good game with 12 points in total she did get support from Jada Mohan (10 points) and captain
Ginelle Ifill (7 points) but the effort did not pay off.

Focus is the key in this phase for Barbados because Cuba is seen as their direct competor is this tournament, and they will likely meet each
other in the next rounds upon advancing from the preliminaries.

The host, Suriname, saw within a short time that their match against Dominican Republic would be very tough. The final score tells the tale: 49
90 in favor of Dominican Republic. The Surinamese team was intimidated by the well-coordinated and physically stronger opponent. The
Dominican Republic outscored their opponent in every quarter, they built an advantage of +29 points after the first half which was the basis for
their win. Cindy Vianen (captain Suriname) stated they couldn’t get into their game and their set-plays didn’t go as planned. A lot of shots were
missed and their defense showed some flaws which they couldn’t correct during the game. The best player from Suriname was Cindy Vianen
with 15 points followed by Suelle Shepperd with 11 points. In the second quarter the Surinamese side only managed to score 5 points opposed
to the 23 points of their opponent.

This was bound to happen for as the Dominican Republic side has a number of players with international experience, their defense is strong and
their coach believes that his team can deliver even more. The key scorers for Dominican Republic were Sugeiry Monsac (15 points), Esmery
Martinez (14 points) and Anyi Hodge (12).

The Dominican Republic look forward to having a good tournament, their biggest rival is Cuba. Suriname feels like home turf to them, with little
to no adjustments they can get the most out of their team. 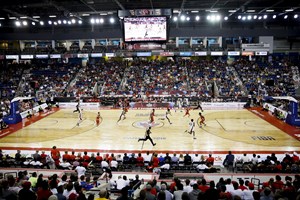 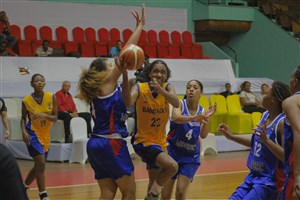