YAOUNDE (Cameroon) - In a continent where large numbers of women tend to cut their basketball careers short due to motherhood challenges, there is a growing number of current and former players changing the narrative.

Angolans Nadir Manuel and Rosa Gala, Kani Kouyate of Cote d'Ivoire, Egypt's Hagar Amer, Mozambicans Deolinda Gimo and Odelia Mafanela and  Oumoul Khairy Sarr of Senegal - just to mention a few - left the game for a while after maternity, but have since returned to do what they know best.

They are now in Yaounde donning their national team jerseys, running and up and down the floor, making shots, displaying some incredibles plays for the delight of fans watching the the 26th edition of Women's AfroBasket inside the Palais Polyvalent de Sports in Yaounde or via TV. 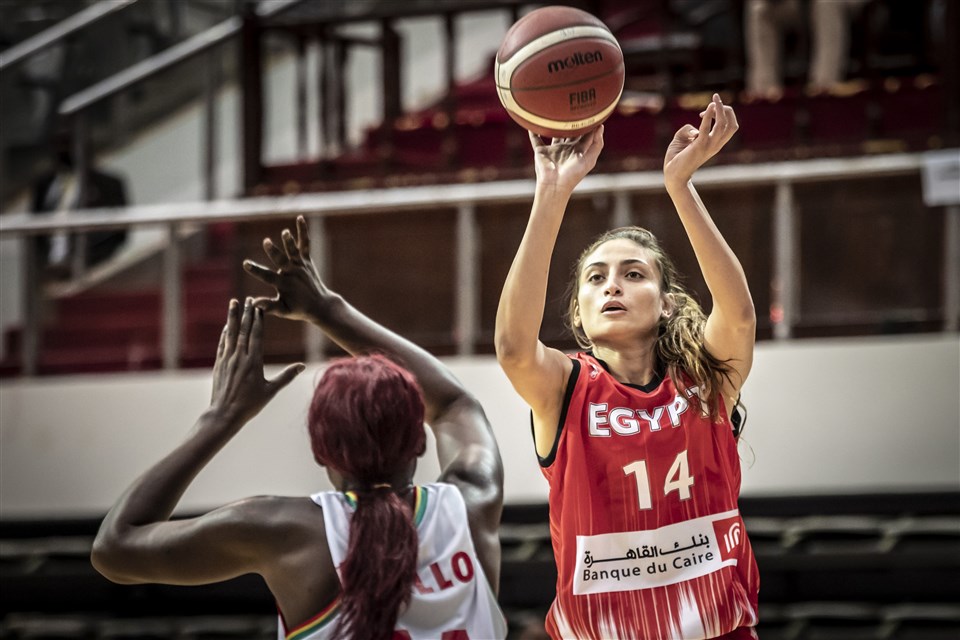 And that passion for the game of basketball is even better reflected by some former Women's AfroBasket stars who travelled to Yaounde to remain connected to the game in different capacities.

In common, they say, the love for the game speaks louder than any motherhood challenge, and they would do everything they can to try to keep hoops in Africa growing.

The two-time Women's AfroBasket MVP (2011 and 2013), who inspired Angola to their two continental titles, is almost seven months pregnant, but when the offer to lead the Angolan delegation to Yaounde as the team's Manager came, she didn't think much. 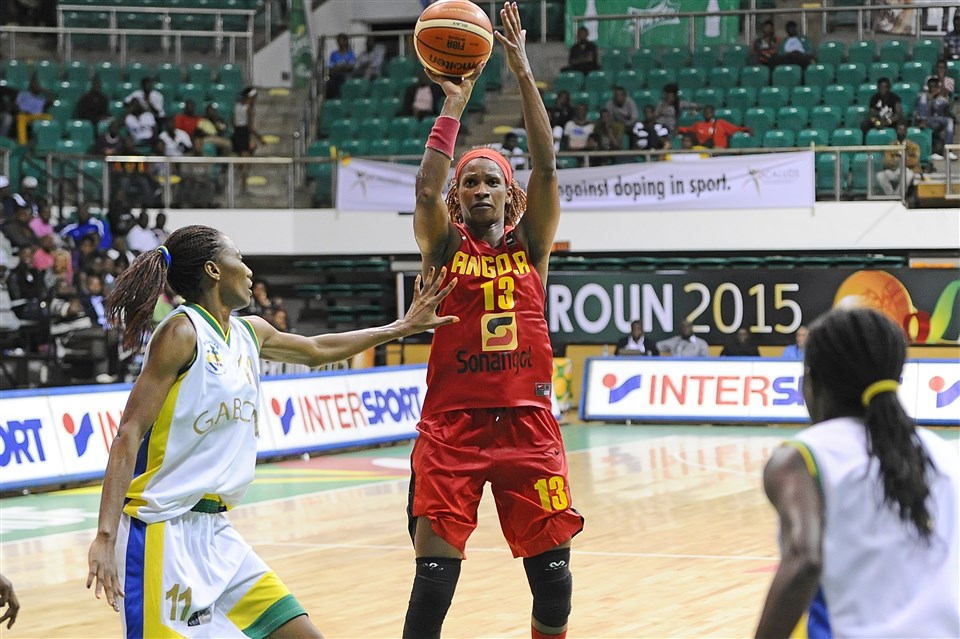 "This is my environment. I've always loved the game of basketball, and I felt a bit nostalgic when we arrived here in Yaounde," said Mauricio who last featured at Women's AfroBasket in 2015 in the Cameroonian capital of Yaounde.

"When I saw the girls practicing, I grabbed the ball and started making some shots, but our team doctor didn't like it and asked me to stop for precautions of my pregnancy ," said the 41-year-old who currently serves as Board member of the Angolan Basketball Federation.

"I just want to remain connected to the game and try to share my experience" added Mauricio, whose third child is due on Christmas Day.

Mauricio's second child was born 18 months ago, a year after she retired from her playing career. And her 16-year-old daughter currently plays for Benfica in Portugal.

Basketball, Mauricio said, has prevented her from being with her relatives and friends more often that she would have liked to.

“As a player, most of the times, you have to make sacrifices as you have travel a lot, stay weeks, months away from your own family.

"Once you retire your main focus is your family, friends and loved ones. It is the time to spend more time with them. This is the time when you as a former player have more time to look after yourself and start planning on your next steps in life. 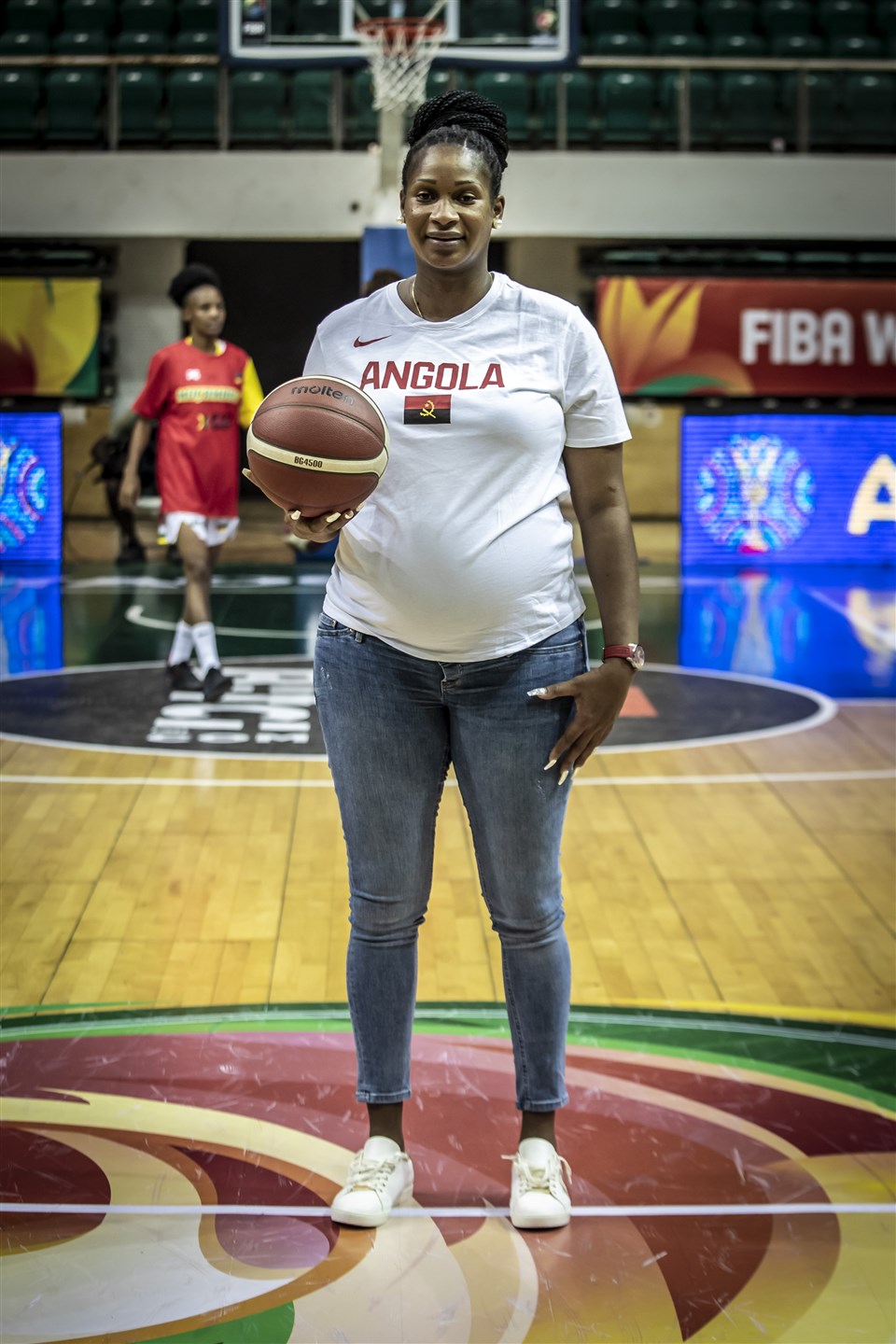 "But, basketball always remained at the back of your mind."

Mauricio admits that she would be delighted to see her country return to the podium of the Women's AfroBasket, an achievement that last happened in 2013 when they won their second straight continental trophy in Maputo and she scooped her second MVP award.

"We have been working extremely hard to win the trophy again," she stressed.

Although Mauricio remains optimistic about the future of her national team, she observes that the game on the continent as a whole is moving in the right direction, especially with former players like her being involved to transform the game and share their skillsets and passion with new generations.

"It's us, the former players, who have the important duty of taking African basketball to the next level," said the five-time Women's AfroBasket participant.

Former player Silalei Shani suspended her national team career after giving birth, but she returned for her last shot at the Women's AfroBasket 2019 in Dakar. 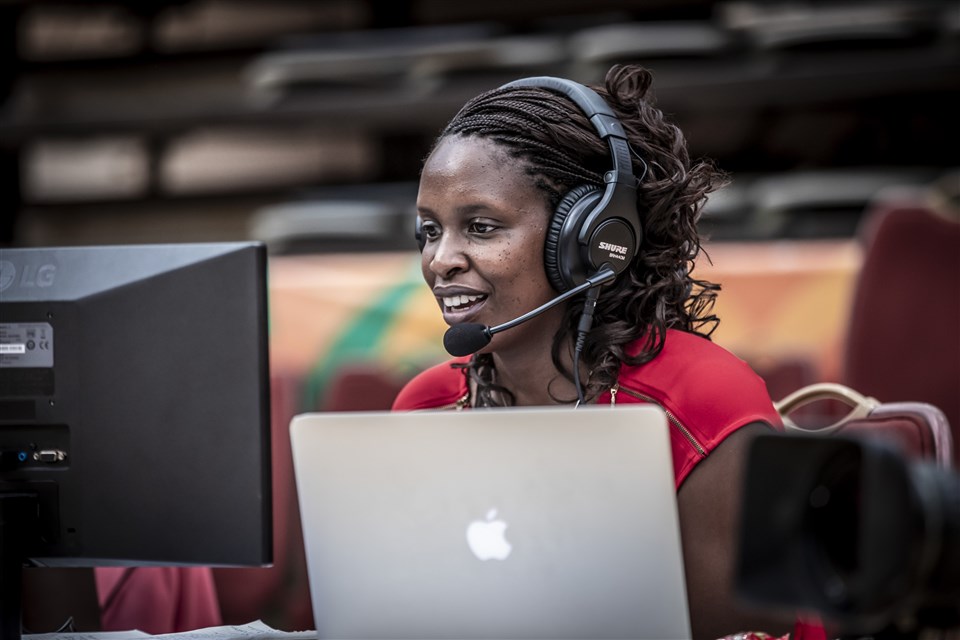 Shani travelled to Yaounde as the first former Women's AfroBasket player to call the games for FIBA TV.

The 34-year-old made her Women's AfroBasket debut in 2013 in Maputo.

"I have been at this tournament repeatedly," she said.

"I understand the environment, I have seen players on the court that I used to play against.

"I have done commentary since 2013, [but] never considered it as a career, it was [more like] as a hobby for the past few years, and then I managed to develop that talent. Now that talent has been recognised and can be used in a bigger space. I am excited that FIBA were able to recognise that and called me to this assignment."

Asked if motherhood impacted her decision to retire from her national team, Shani replied: "I don’t think it's necessarily motherhood [that made me quit basketball] although it's true that your priorities do shift and [it] becomes less important to travel, but I think it was just a natural leaving of the game, just to understand that there were other things to do with my talent and with my skillset." 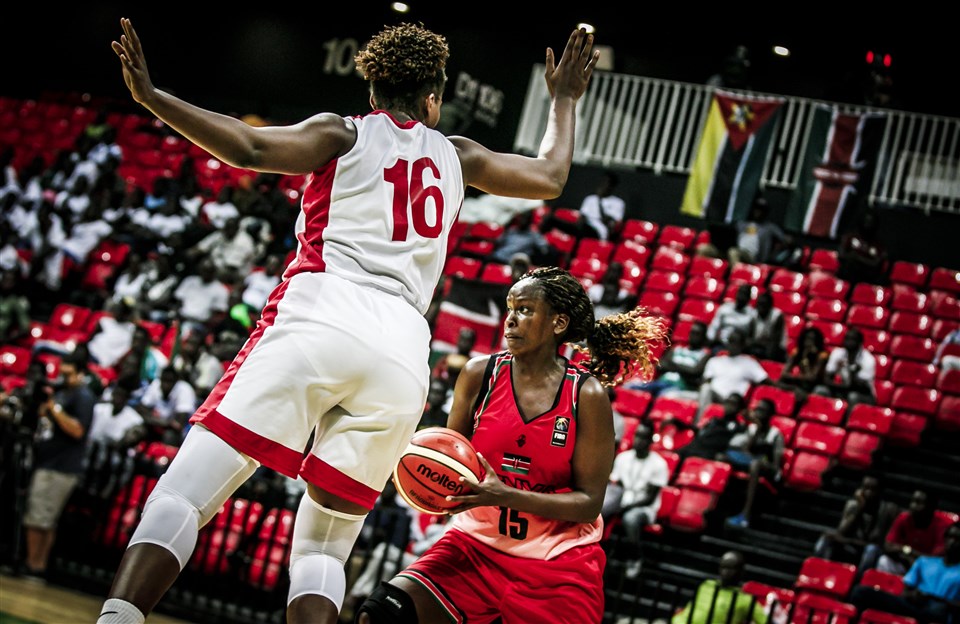 Shani isn't necessarily new to broadcasting. She has hosted and and produced a African basketball TV show called "Ball'n Africa" and before that, she produced BAQE, a show that she is trying to get back on peoples' televisions.

"I am looking for a broadcast partner to contribute to the basketball space and tell African basketball stories. We have a lot of journalism in terms of written content when it comes to African basketball we don't have a TV magazine show. That is something that I am definitely very passionate about."

What does Shani make of the game on the continent?

"Seen what the Nigerian team has done not just on the African continent, but also globally, I think the sky is the limit for them. We can see other teams catch up, like Mali, Senegal who have outstanding players.

"The continent is a scouting ground for basketball talent. It's a time to keep an eye in women’s basketball in Africa.

"What needs to happen is more support from federations, especially on the financial end. The talent is there, [but] we need the infrastructure to grow and develop it," Shani pointed out.

Basketball is one sport that is very addictive by nature and very difficult to walk away from, no matter the role one is assigned to play.

And for some African women players who have called it quit with playing have suited themselves into different roles either as coaches, team managers, commentators and even officiating.

For former Egypt women national team captain Aliaa Mahmoud Gamal staying long in the game has always been a dream for her. 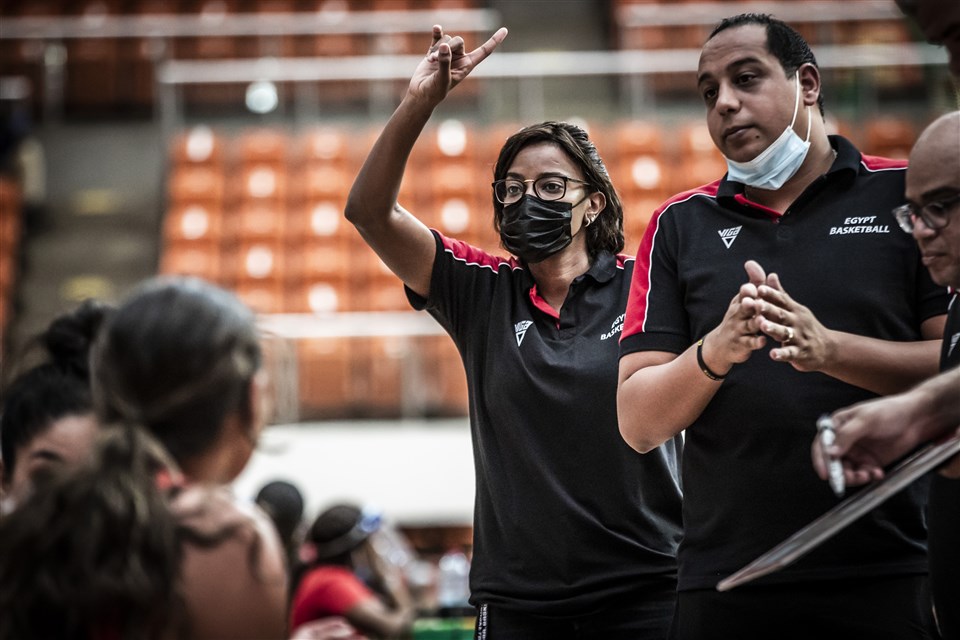 The 38-year-old who is now one of the assistant coaches of the Egyptian team says it was somehow easy for her to adapt to her new role because most of the current players in the Egyptian national team were her teammates.

So it's the way she has been interacting with them as a captain that she's still carrying on.

Asked if marriage and child bearing contributed in her early exit from the game, Gamal whose last outing for Egypt was at the 2013 edition of Women's AfroBasket, said that it has always been her wish to be a coach and she intended to begin at an early stage.

Moreover, she was married with a child before her last Women's AfroBasket outing in 2013.

"I was already married and had a child while I was still playing so the issue of whether I had to quit playing because of childbirth does not arise," Gamal insisted.

"I have always loved to continue to be in basketball even after my playing career and I am happy I took to coaching so early."

For Cameroon Priscilla Mbiandja getting involved in the game from playing to coaching and even refereeing runs in her family as her mother Madame Ngankou Yimga Josiane played for the Lioness, coached different clubs in the Cameroon domestic and the first female referee in the whole of Cameroon. 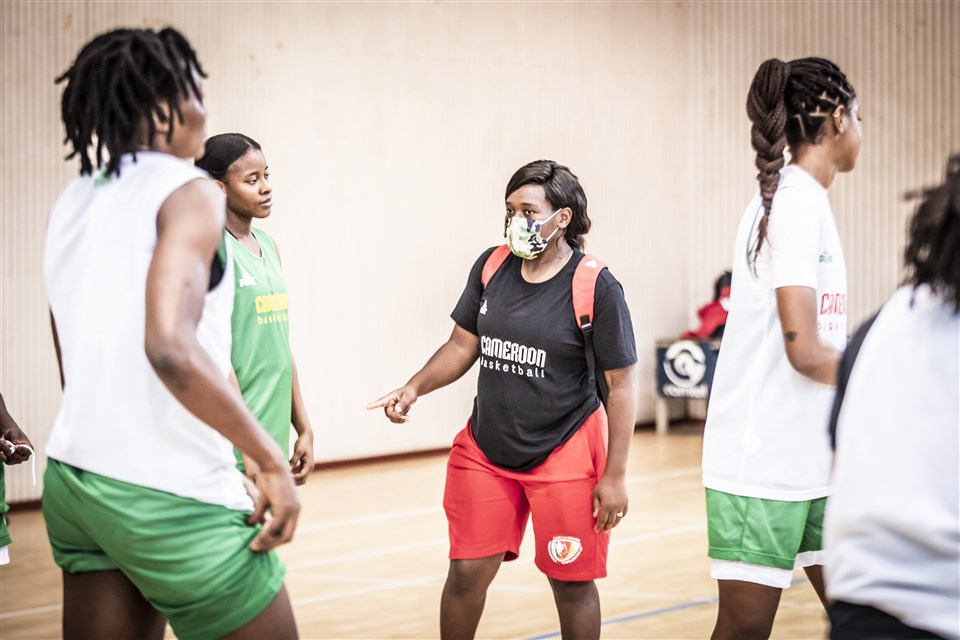 "I drew inspiration from my mother who was involved with the game at different levels and I want to regard her as my role model even though I would like to cave a niche for myself," said Mbiandja, a six-time Women's AfroBasket participant.

The mother of two felt she has nothing more to offer continuing as a player and coaching readily comes to mind for her.

The 32-year-old former point guard says childbirth has nothing to do with her calling it quit with playing but that she felt it is always better to pursue her life-long dream and other budding talents the opportunity to show case themselves.

"My taking to coaching is a dream come true for me because I am from a family where doing ones best for basketball has become a way of life, my mother played different parts at different times from playing to coaching and officiating.

"I am delighted for following her (mother) footsteps but the only one I may not embrace is refereeing and you won't believe it that at times when I'm on bench with other coaches I totally forgot that I am no more a player though maybe because the switch has not been long," she concluded.

Aminata Sininta helped her native Mali win the 2007 edition of the tournament in Dakar, which she describes as one of the best moments of her basketball career. 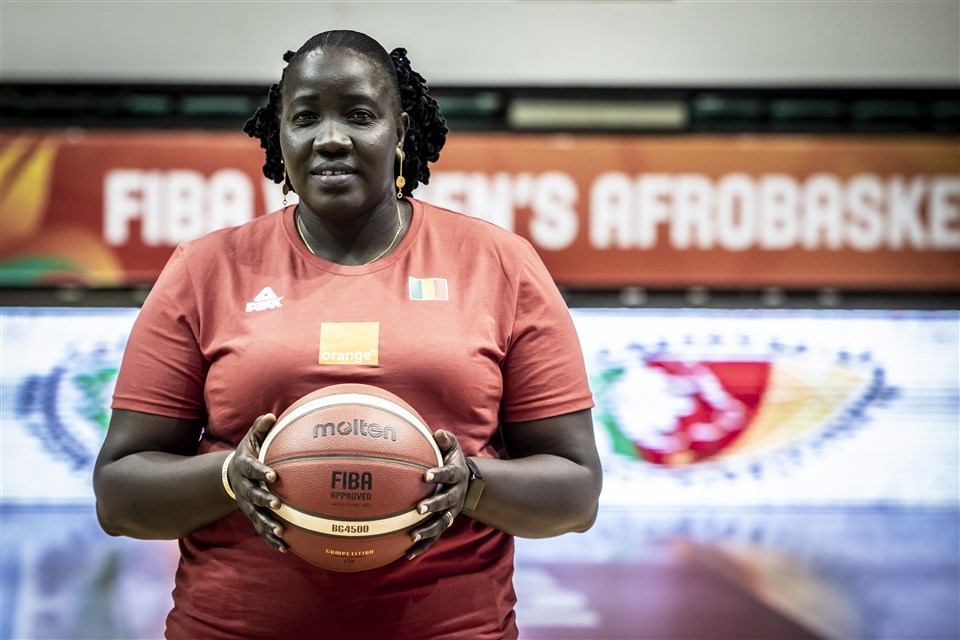 Now serving as one of Mali's assistant coaches, Sininta recalls that beating Senegal in Dakar in the final "was not easy especially because Mali had never beaten Senegal before. And winning the title in Dakar was special."

Upon her national team retirement, the 35-year-old got her coaching qualifications and she never looked back again.

Asked if family life impacted her playing career, she replied: "I continued playing even being married. So it wasn't because of my marriage or work that I quit basketball. I quit it because I wanted to go into coaching."

But it's not all about players.

Referee Zouzou Nadege has returned to the big stage after a two-year maternity leave.

The Ivorian referee, who officiated at the 2016 Rio Olympics, started her officiating career in 2010 after a brief playing career. 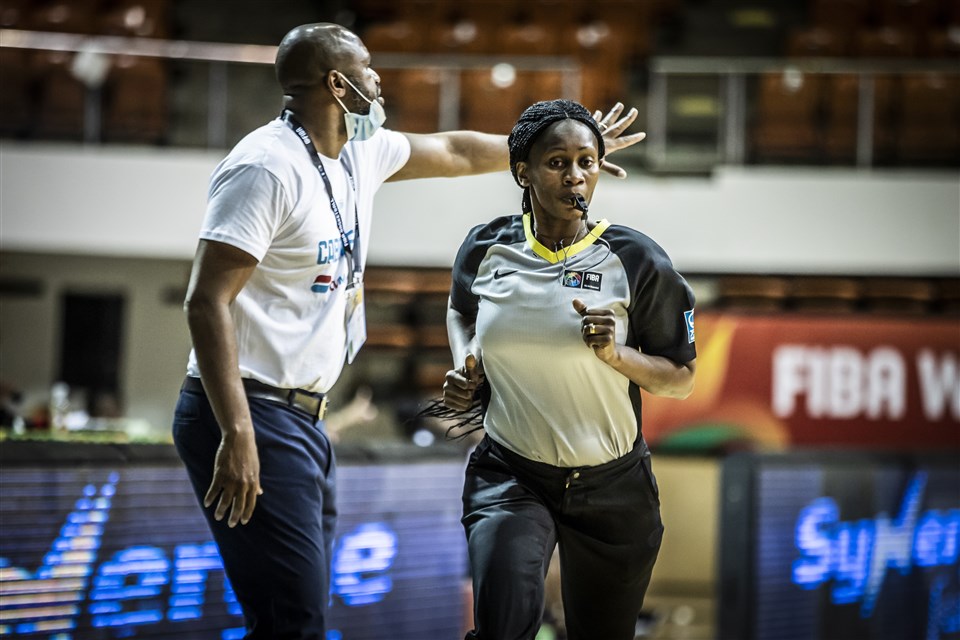 "It wasn't easy to return as top basketball referee after my maternity leave," she admitted, adding: "I needed to pass my international referee license again."

But there is something that worries Nadege as an official. "Women's basketball lag behind compared to men's basketball. We need more women's competitions," she noted. 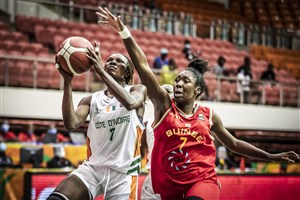 Cameroon, Mali, Nigeria and Senegal march on to the Women's AfroBasket Semi-Finals 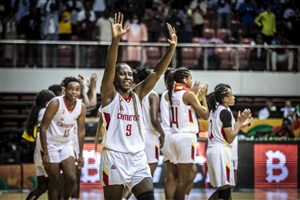 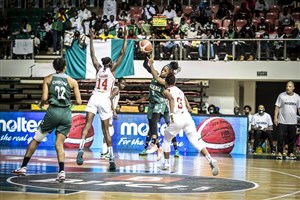 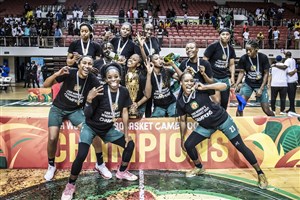 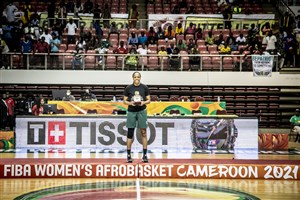