By doing so, they joined the USA, Australia, Canada, Brazil, Japan, Senegal and Serbia in the Women's Olympic Basketball Tournament. One more team will qualify over the weekend to complete the field of the 12-team event taking place from 6-20 August in Brazil.

In Friday's first Quarter-Final, Spain cruised past Korea, 70-50, thanks to an excellent display by Sancho Lyttle who finished with 20 points and 13 rebounds in the winning effort.

Afterwards, it was the turn of Nevriye Yilmaz and Lara Sanders to power Turkey to a 71-45 defeat of Cuba by combining for 35 points. The win secured a second Olympic appearance in a row for the Turks.

Shao Ting's determination inspired the Chinese as they saw off Belarus 84-70 to earn a fifth consecutive trip to the Olympics.

To end the day, tournament hosts France cruised past Argentina 90-53 to advance to Rio.

The losers of Friday's Quarter-Finals still have one last chance to join the winners at this summer's Olympics.

On Saturday, Cuba take on Korea before Belarus face Argentina. The winners of those games will then square off in Sunday's Fifth-Place Game, where the last ticket to Rio will be at stake.

A draw will take place following the Fifth-Place Game to complete the picture of how the groups shape up in the Women's Olympic Basketball Tournament. 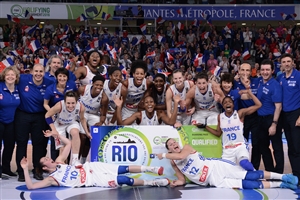 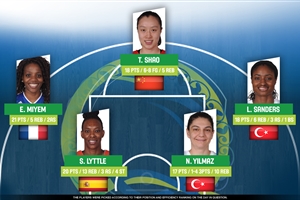