SPLIT (Croatia) - It is not about who starts, but who finishes the game. Moritz Wagner exploded for 28 points in 28 minutes in the Final, ending Germany's 13-year-long drought when it comes to Olympics.

Wagner has been vocal in every single minute of playing time in Croatia. Either he was shouting "LET'S GO!" after a made shot, or handing out defensive instructions to his teammates, but it was impossible to miss the lightning bolt with the number 13 with Deutschland written on the chest.

Moe Wagner came off the bench to devastating effect, his 28 points in as many minutes putting Brazil to the sword ⚔️

"I don't care about personal awards, to be honest," Moritz said after the Final. "I didn't even know there was an award, I don't play for that. I try to win games, and (in the Final) I scored more points than somebody else, but the next day, it could be somebody else, and then somebody else... That's what makes this team great."

The NBA center embraced his role off the bench, scoring 14.3 points in 18.9 minutes of action over the four games in Split, while also grabbing 4.0 rebounds and 1.5 steals per game. The Final was all about the 24-year-old Orlando Magic man, he shot 9-of-12 from the field, knocking down three of his four three-pointers made at this event, and Germany were a +14 team with him on the floor.

Wagner was awarded the TISSOT MVP of the FIBA Olympic Qualifying Tournament in Split, joining the likes of Luka Doncic and Achille Polonara who won the same award in Lithuania and Serbia, respectively. 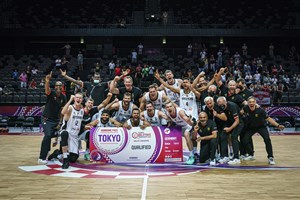