Nirra Fields sparked the North Americans' offense with a game-high 16 points and 2 assists as Canada beat China 71-59 to finish a perfect 3-0.

"Nirra's athletic ability and her speed and her ability to knock down open shots and create stuff for others is just tremendous." - Canada head coach Lisa Thomaidis

Despite the Chinese pair of Chen Xiaojia and Zhao Zhifang scoring 10 points apiece, the East Asians were unable to avoid their third straight defeat.

Monday's result comes after Canada won Saturday's opener 82-63 and followed that up with a 74-62 victory the next day.

The biggest difference between the winners of the 2015 FIBA Americas Women's Championship and China in Game 3 was shooting display: whereas Canada shot 45 percent from the field, Tom Maher's team was limited to just 35 per cent.

"Nirra's athletic ability, her speed and her ability to knock down open shots and create stuff for others is just tremendous," she said. "She's come a long way in the last few years and we're really happy with her progress."

China, who secured one of the five tickets for the Rio Olympics after a successful 2016 FIBA Women’s Olympic Qualifying Tournament, were unable to stop Canada's dominance in the paint, where they held a 40-16 scoring advantage.

"We scored a lot in the paint and it's great for us to get that many paint touches and attempts at the rim, that's what we want, and our players are really buying into that and not taking any bad shots," Thomaidis said. "I think our shot quality has been quite good and it's been reflected in our field-goal percentage."

Canada and China will face off again at the Rio Olympics having been drawn in Group B, which also includes Spain, Senegal, Serbia and the World and Olympics champions the USA. Japan too good for Senegal in preparations for Rio Olympics

Maljkovic selects 15 for Serbia’s final preparations ahead of Rio 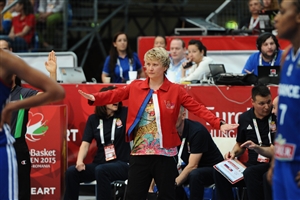