TOKYO (Japan) - The United States  racked up a staggering seventh straight Olympic Women's Basketball title after Brittney Griner proved too hot to handle for host nation Japan as she spearheaded a 90-75 triumph in the Saitama Super Arena.

The towering center dropped 30 points to move past the 29 scored by her compatriot Lisa Leslie in the Atlanta 1996 Games to set a new Olympic basketball Final scoring record.

USA win a seventh straight Olympic gold medal and assert themselves as one of the most dominant teams in all of sports.#Tokyo2020 | #Basketball pic.twitter.com/OUAqiYdcZp

Japan needed a quick start and to really get onto the front foot if they wanted to achieve the ultimate fairytale finish, but couldn't find their range. With the USA far too strong under the basket in what was their 10th gold appearance in the gold medal game, even when Japan did come alive offensively, they simply couldn't stem the flow of American scoring.

The victory also handed veteran duo Diana Taurasi and Sue Bird the goodbye they wanted as the pair claimed a stunning fifth gold medal at the Games.

Turning point: There arguably wasn't one, since the USA jumped out on Japan and never really looked back. When their opponents did rally and wakeup shortly before halftime, Dawn Staley's team scored eight straight points to reassert control and they always had Japan at full arms' length after that.

Game hero(es): Griner found it far too easy at the hoop and finished with 30 points. Her frontcourt partner A'ja Wilson also had a birthday to remember with 19 points in what has been a dream debut for her at these Games. Breanna Stewart meanwhile showed out as usual with 14 points, 14 rebounds and 5 assists.

Bottom line: Japan had already realized one dream of making the title game and did an incredible job en route to the Final, winning the respect and admiration of fans worldwide.  They dreamed big and wanted to take the last step but couldn't compete physically with the size of the USA, who also did a good job in nullifying the impact of Rui Machida who has made Japan tick all tournament long. Ultimately Japan may have lost this game, but they made history with a first podium place, a first Final appearance and led by head coach Tom Hovasse they will cherish this silver medal.  This team is still the pride of their nation.

What to say about the USA? It's an incredible legacy they have continued with title number nine. They were dominant from tip to buzzer and finished the tournament head and shoulders above any other nation. Nobody really got close. Setting the bar so high again, they are heads and shoulders above the competition and can head back to America thrilled with the job done by the coaches, players and staff. They said: "It has been a tremendous journey and it's always something special putting a team together and growing torwards a goal. We didn't know who we were at the beginning. But on this last day, we locked in and did the things needed for anther gold medal. There is always pressue when you put this jersey on. We always find a way and to do it with class.  There is nothing like playing in the Olympics. I have been part of college and the WNBA, but when you put that USA on your chest, you are playing for everyone in the country," Diana Taurasi who added, "I love Paris,"in respect of whether she really was done.

"I am definitely done..... But I could not be more happy. It's always difficult to win a gold medal, but this year there were just so many challenges with no fans, no friends or family. It was so isolating in many ways, so for our team to deal with that adversity and get it done is very special," Sue Bird, who is hanging up her shoes.

"The journey we have been on as a team has been long and there have been peaks and valleys along the way, but seeing the players with the silver medal and look of pride on their faces was worth everything we have been through. I am very happy for Japan basketball, the players and the staff. I am sure this will sink in more during the coming days The game today was not how I had envisaged it. I thought we would be effective in more things, but their defense was phenomenal and they smothered us. They took away our rhythm. We just couldn't stop their inside game at all. But our entire team scored a basket today and they can all say they have now scored in an Olympic Final - which is quite something," Japan head coach Tom Hovasse

On being in the stand opposite his players alone, as they recieved their silver medals, "It kind of hit me a little bit - it was very touching and I got a little emotional and that is part of the melancholy I feel - I am not sure what is going to happen - the run of this particular team has come to a close and we gave it our best effort - I felt like a dad to everybody on that stage - watching them was really emotional, but so nice." 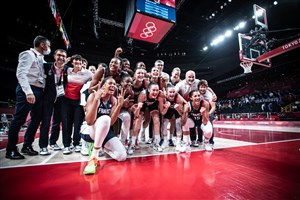 Revenge for France as they sink Serbia to take Olympic bronze 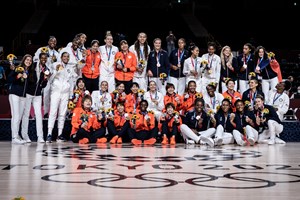