TOKYO (Japan) - We are a day away from the Quarter-Finals in the Saitama Super Arena. That gives us one last chance to update the Power Rankings before the teams sort out the actual rankings on the court.

The Power Rankings aren't the predictions on who could finish at the top and who could not. The fact that the two top-ranked teams here cannot reach the Final together should've made that clear. Instead of predicting, we are trying to give an honest assessment of one team's power after witnessing all the games in person in Japan. Hence, the rankings of current power. The Power Rankings.

Now that we've gotten the intro part out of the way, it's time for the actual rankings.

Spain held Slovenia to 95 points on Sunday, their lowest mark since the Final in 2017, when they had 93. The last time Slovenia scored less than 90 points in a major event was 11 games ago, in the Round of 16 during the FIBA EuroBasket 2017 against Ukraine.

That's a hefty number of words to say that the Slovenians have the best offense in international basketball over the past four years. Yes, it has a lot to do with that #77 kid. The last teams to win medals in their first Olympic experience were Croatia and Lithuania in 1992.

Where did that come from?!? France, who struggled mightily during the exhibition games before the Olympics, came to Tokyo ready to play, defeating the USA for the second straight time in their head-to-head battles and thus climbing the ladder all the way to win the group. It's been 21 years since their last Olympic medal - they are just two wins away from one now - but knowing their state of mind, they won't settle for two wins the rest of the way.

They want three. The win over the USA proves it. France play Italy in the Quarter-Finals. It will be their 29th duel in major events, with the current score at 14-14. Seems crazy that they haven't played each other in FIBA events for ten years!

The only reason why Australia dropped from number one to number three is the fact that they cannot count on Aron Baynes the rest of the way. Pair that up with a bracket that has them on the same side with the FIBA Basketball World Cup 2019 Finalists and the reigning Olympic champions, you get a tough assignment for coach Brian Goorjian and his guys.

If they manage to pull it off, you will have a hard time finding anybody over the world who would hate it. The Boomers are a loveable squad. Guys like Joe Ingles, Patty Mills, Jock Landale or Matisse Thybulle can win over even the most biased of all juries.

Again, Gregg Popovich and his guys are the number one favorites to win the event. They drop to number four here because of their defeat to France - the one that ended their run of 25-straight Olympic wins - which has made some people compared this team more to the 2019 squad than to the gold medal vintages of 2016 or 2012 or 2008.

The fact that they have to face their friends from Spain - the team which pushed them to the limit in the three aforementioned Olympic years - is another reason for Team USA to be completely locked-in because another run is in danger: the USA climbed the podium in all 18 of its Olympic appearances so far.  Keeping this streak alive requires Team USA's toughest Quarter-Final test in recent memory.

One thing was noticeable as the Spaniards were walking off the court on Sunday night. They just had a two-hour bar fight with Slovenia, lost a game in which they scored 87 points, dropped to the unseeded part of the draw, and yet, they looked relaxed. They looked calm, which is scary. Really scary.

It feels like they know how good they are and they know that one defeat won't ruin their long term plans here in Tokyo. They won't be afraid of the USA in the Quarter-Finals. Why should they? After all, they ARE the world champions.

Is it too late to add Gianmarco Tamberi to the team? Yes? Oh well. Even without him, it feels like the Italians are confident ahead of their duel with France. They have the physicality to push and pull, but the problem could be dealing with France's height.

Rudy Gobert, Vincent Poirier, Moustapha Fall are too tall to handle for most teams. They will be the taller side against Italy, too. Especially because coach Meo Sacchetti loves the small-ball, fast-paced basketball. Hey, maybe that's the answer, just put the pedal to the metal and run with France.

The moment that Patricio Garino suffered an injury, Argentina unlocked their new offensive potential. Nico Brussino got more minutes on the wing, Gabriel Deck started playing from the five-position against Japan for a period of time,  showing coach Sergio Hernandez can go with the one big modern type or the two bigs classical type of basketball, and the guards... Oh man, don't get me started on the guard.

Argentina's 1-2 record doesn't paint the real picture here. Both Hernandez and Luis Scola said they like their chances now, and it's a good thing that they both know how to beat Australia. The last time they met was in the FIBA Basketball World Cup 2010 with Scola knocking down the game-clinching free throws among his 31 points to lead Argentina to a 74-72 win.

The best scorers on the other side? Joe Ingles with 22 and Patty Mills with 21. History repeating itself is an option with all the names involved in this one.

It's crazy because Henrik Rodl and his players are enjoying both their best and their worst summer ever. Because obviously, they are here, they are among the top eight teams in the world right now, nobody thought that would happen.

And yet, it's the worst summer ever. First, they had to play Croatia in front of football fans in Split, in the Semi-Finals of the FIBA Olympic Qualifying Tournament. Then they had to play Brazil, a team which won their previous three games by +26, +27, +28, in the Final of the tournament.

Then, after somehow winning both of those games, they ended up in the same group with two teams that defeated the USA a week before the Games, and a team that blew out Serbia in Belgrade. Get this, somehow, SOMEHOW, Germany managed to advance to the Quarter-Finals.

The fact that they were drawn up against Slovenia in the Quarter-Finals just goes in line with the horrible luck of the draw all summer long. Don't write them out just yet. They already know how to beat a previously unbeaten Slovenian team in the Quarter-Finals. Google FIBA EuroBasket 2005 if you don't believe me... 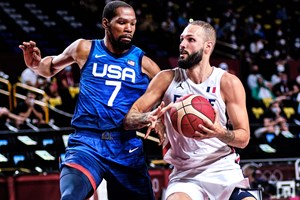 Who was the most impressive player of the Group Stage in Tokyo?

USA and Spain renew Olympic rivalry and other captivating Quarter-Finals 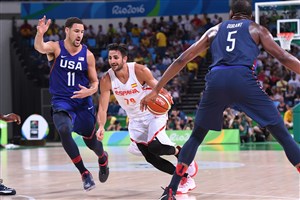