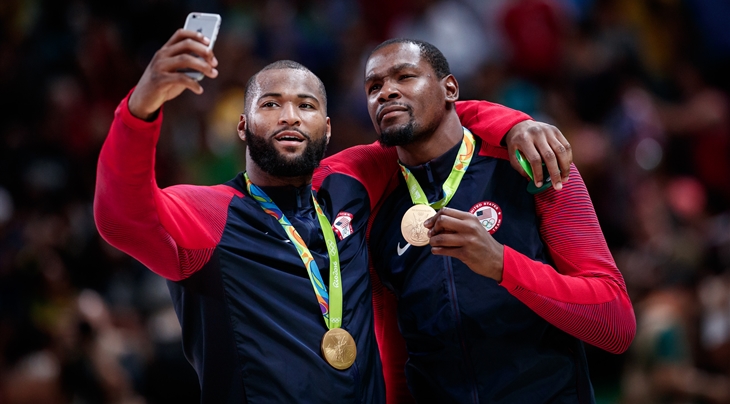 RIO DE JANEIRO (Rio 2016 Olympic Games) - DeMarcus Cousins capped a roller-coaster Olympic Basketball Tournament with a dominating effort for the USA and stepped up to the top of the podium for the second time in three years.

A member of his country's 2014 FIBA Basketball World Cup-winning side, Cousins came off the bench and had 13 points and 15 rebounds in the Americans' 96-66 triumph over Serbia on Sunday in the Carioca Arena 1. Serbia did not, Cousins said, do themselves any favors when they threw a scare into the United States in their Group A meeting. The USA won that game, 94-91.

"I think it was the best thing to happen for us because it let us know we had to take it to another level," Cousins said. "It let us know it's not going to be just a walk in the park."

The 2.10m center had struggled for much of the Olympics, getting into foul trouble. He was at his best against Serbia in the Gold Medal Game.

"It's all worth it," he said. "Everything we went through. Everybody had their own little adversity, we all overcame it and this is the best feeling ever. Honestly. We were engaged from start to finish. There was no looking back."

Cousins said he went up and had words with his Sacramento Kings General Manager Vlade Divac after the win.

"I told you so," Cousins said to Divac, smiling.

Divac, a legend of Yugoslavian basketball, wore a Serbia shirt and sat in the front row for the game.

"They are an incredible team," Cousins said of Serbia, who blew out a very good Australia team in the Semi-Finals.

There were struggles for the USA in this tournament but Cousins says that should not have surprised anyone.

"I don't think people do understand," he said. "They see the guys on the roster and just automatically think we're going to win. This (international basketball) isn't the way we play. This is an adjustment for everybody on the roster."

As for how he maintained a sense of focus, particularly on Sunday against Serbia when the odd call may have gone again him, Cousins sighed and said: "It wasn't about me. It was about this (gold medal) hanging around my neck."