"Kyrie and James were amazing. But everybody wanted to work. They were always prepared. I'm proud of them… We feel very privileged to be called world champions," said USA head coach Mike Krzyzewski.

Asked about how this triumph felt in comparison to the 2010 FIBA World Championship in Turkey and the 2008 and 2012 Olympic gold medals, he explained: "Each one is special. The main difference is the players change. But the culture has stayed the same. The players have loved it. They didn’t have to be sold. They wanted to be part of it."

Irving, for his part, was in no doubt about the magnitude of the triumph.

"This is by far the biggest accomplishment in my life so far. This is one of the greatest moments in my life. I did this with guys I can call my brothers for the rest of my life," he said.

The Americans, who won their nine games at Spain 2014 by an average of 33 points, finished the Final hitting 15 of 30 three-pointers after making 11 of their first 15.

The 37-point victory over Serbia was close to the all-time mark for the biggest winning margin in a Final of 46 points in the USA's 137–91 defeat of Russia in 1994. The 129 points were also the second-most ever in a Final, behind those 137.

The USA claimed their fifth world crown, pulling them even with Yugoslavia for the most in history. Yugoslavia are also the last team to repeat as world champions in 1998 and 2002. Brazil also accomplished the feat in 1959 and 1963.

Serbia secured their best placing under the Serbian flag as runners-up as Nikola Kalinic and Nemanja Bjelica both scored 18 points to lead the way for Serbia while Bogdan Bogdanovic had 15 points and Milos Teodosic scored 10.

Serbia were able to keep possession of the ball and made their first five shots - three of them off assists - for a 10-5 lead and a US timeout. They even pushed the lead to 12-5 on the first possession after the timeout.

The Americans responded with a 17-3 run for a 22-15 lead with Irving hitting two jumpers and making a lay-up while Nenad Krstic missed a couple of opportunities inside.

Three-pointers by Irving and Klay Thompson pushed the margin to 30-19 and Irving’s third three-pointer of the quarter had the cushion up to 35-19, which was down to 35-21 after one quarter.

The USA didn't cool down at all from the outside in the second quarter with six more efforts from beyond the arc helping increase the lead out to 31 points - 67-36. The advantage at halftime was 67-41.

Serbia cut the deficit to 24 points early in the third quarter but the Europeans couldn't get any defensive stops and Irving continued his sharp-shooting as the lead extended to 39 points.

The only questions left as the Americans headed in the fourth quarter up 105-67 was if they could match the records from the 1994 team.

Look how Demarcus Cousins celebrate that he is #spain2014 World Champion https://t.co/UICmZ2hW0M

.@Ciara at the #Spain2014 Final! pic.twitter.com/ClGPfRC7nE 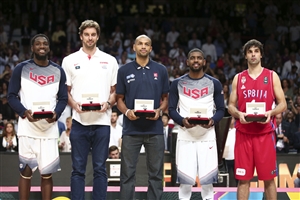