The Class of 2020, which wasn't announced until now due to the coronavirus pandemic, has 12 basketball icons in all. They will be enshrined into the FIBA Hall of Fame during a digital ceremony on June 18, together with the Class of 2021.

Nash, one of his country's most celebrated players, was a point guard at the FIBA Basketball World Cup 1994 in Toronto and captain of his national team at the 2000 Olympics in Sydney. Also the MVP of the FIBA AmeriCup 1999 in Puerto Rico after leading Canada to a runners-up finish, Nash's professional career spanned almost two decades in the NBA, where he was MVP in both 2005 and 2006.

Pesic, one of the finest coaches ever, entered the profession in 1982 and enjoyed huge successes with various clubs in Europe. As a national team coach, Pesic steered hosts Germany to the FIBA EuroBasket crown in 1993 and then led Yugoslavia to glory at both FIBA EuroBasket 2001 and the FIBA Basketball World Cup 2002.

Volkov, one of Ukraine's most celebrated sports figures, played for the Soviet Union team that won FIBA EuroBasket 1985 in West Germany and then the 1988 Olympic gold medal in Seoul, Korea. Having enjoyed a stellar career in Europe, the big man played in the NBA from 1989 to 1992 with the Atlanta Hawks.

The Class of 2020 marks the first time that players from Canada, Hungary, Japan, Korea and Ukraine are inducted into the FIBA Hall of Fame.

The FIBA Hall of Fame Class of 2021 will be announced on Thursday, April 1.

Here is the full list of inductees that make up the 2020 Class of the FIBA Hall of Fame:

In the weeks leading up to the Induction Ceremony profiles of every inductee will appear on FIBA.basketball.

About the FIBA Hall of Fame
The FIBA Hall of Fame is a shrine dedicated to the amazing people who built the foundations of the global sport of basketball since its birth until its accomplished glory of today. It strives to be a genuinely international institution, active in the promotion and remembrance of basketball all over the world and houses the great men and women who were proactive and outstanding in the improvement and development of our sport. Created in 2007, it assembles over 100 outstanding players and coaches from 33 countries and all five continents to date. Its home is the Patrick Baumann House of Basketball in Mies, Switzerland. 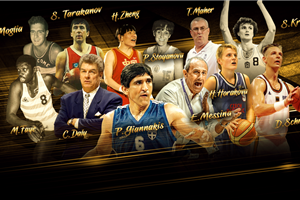