While all the talk has been of teenage ace and University of Connecticut-bound Kia Nurse, it was Langlois who outshone her backcourt colleague as she posted a memorable opening salvo at her first major tournament.

The guard had the hot-hand from downtown, hitting three of her four three-point attempts, en-route to a joint-top haul of 11 points in Canada's 69-54 win over Mozambique. She made her first shot from beyond the arc coming within seconds of stepping off the bench.

"It felt good and especially because we have been practicing for so long that we just wanted to get out there and put everything onto the floor," said Langlois.

"Hopefully this is just the start of a long national team career for me now and I just want it to keep on going.

"It's absolutely amazing to see all the different styles of basketball at this level - something that has passed me by a little, since I have only ever played within Canada.

"This summer has been an outstanding learning experience for me."

I hope to learn much more during the rest of the tournament. - Langlois

The 23-year-old also flew the flag proudly for the Canadian University system - something not lost on the player, who has spent the last four years at the University of Windsor.

"That is all some people seem to talk about in Canada - going to the NCAA," she pointed out.

"It was good to show another side to that and now I'm looking forward to going to Sweden to play professionally with Northland Basket, where I want to help them retain their championship."

Before Langlois can think too much about extending her stay in Europe and a pending flight to Stockholm, she must help Canada improve after a shaky start.

They had to work seriously hard to eventually shrug off Mozambique.

"It was the first game of the tournament and maybe a few people had some nerves," she confessed.

"But hopefully we got it all out and can focus more on the next team."

Canada will play host nation Turkey on their second Group B game. 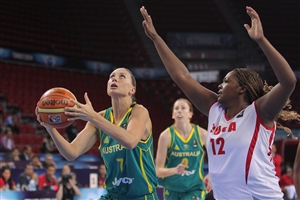 Penny ensures a 'Taylor' made start for Opals 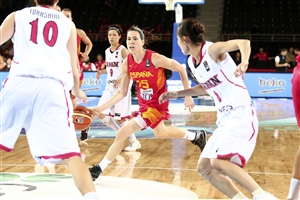