Daly held the reins of arguably the most famous team in international basketball history, guiding the United States to the gold medal at the 1992 Summer Olympics in Barcelona. While he had success as both a high school and college coach, Daly was best known for his almost two decades at the helm of NBA teams, including the Detroit Pistons, whom he steered to titles in 1989 and 1990.

Giannakis achieved legendary status in Greece, spearheading his national team's run to glory at FIBA EuroBasket 1987 as the team's point guard, a title won after an upset of the defending champions Soviet Union. Having also led Greece to the Final of FIBA EuroBasket 1989 and a maiden Olympic appearance in 1996, Giannakis finished his national team career with an impressive 351 caps. He also enjoyed great success at the club level, winning continental competitions with Aris and Panathinaikos.

Messina led Italy's national team to a runners-up finish at FIBA EuroBasket 1997 and in his more than three decades of coaching, he has cemented his reputation as one of the greatest European coaches of all time; among the many title triumphs his teams have celebrated were four EuroLeague championships.

The rest of the Class of 2021 is comprised of a glittering list of players and coaches that have left and in some cases continue to leave indelible marks on basketball.

The Class of 2021 marks the first time that players from China, Germany, Senegal and Slovakia are inducted into the FIBA Hall of Fame.

Here is the full list of inductees that make up the 2021 Class of the FIBA Hall of Fame:

The Class of 2021 will be enshrined into the FIBA Hall of Fame together with the Class of 2020, which was announced on Tuesday after being deferred for a year due to the COVID-19 pandemic.

The digital ceremony will take place on June 18.

About the FIBA Hall of Fame
The FIBA Hall of Fame is a shrine dedicated to the amazing people who built the foundations of the global sport of basketball since its birth until its accomplished glory of today. It strives to be a genuinely international institution, active in the promotion and remembrance of basketball all over the world and houses the great men and women who were proactive and outstanding in the improvement and development of our sport. Created in 2007, it assembles over 110 outstanding players and coaches from 37 countries and all five continents to date. Its home is the Patrick Baumann House of Basketball in Mies, Switzerland. 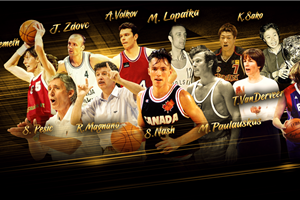