With Turkish officials, distinguished guests and representatives of the 16 participating teams looking on, Mr Demirel talked of the great action which will unfold from Saturday 27 September to Sunday 5 October and that fans can look forward to as a celebration of women's basketball on a global scale.

"It is a pleasure to welcome the international basketball family to Turkey for the 2014 FIBA World Championship for Women," he said. "Over the next 10 days, we will see some of the very best players proudly represent their countries. They will inspire fans in Turkey and all around the world.

"This tournament is about a lot more than Turkey. It is about continuing the emergence of basketball across the globe, in all five continents.

"Hosting this Championship is part of a journey that began over 20 years ago, when we set out to become a leading basketball nation and that meant doing so both in men's and women's basketball. The great sporting results we have achieved in recent years are a proof of this."

Mr Demirel talked about basketball's power extending beyond the court, in reference to the highly-successful CAMP PASS IT ON, the TBF's social responsibility programme which saw 200 kids and 100 coaches from 80 countries come together for a week-long basketball camp this summer, the first of many activities as part of the initiative.

Mr Elphinston brought the best wishes of recently-elected FIBA President Horacio Muratore and FIBA Secretary General Patrick Baumann, who will be on hand when the action gets underway in the host cities of Ankara and Istanbul.

He also expressed his pleasure at being back where his own term as FIBA President concluded in 2010 on the occasion of that year's FIBA Basketball World Cup.

"I am very pleased on behalf of FIBA to be back here. This is a wonderful basketball country and a source of inspiration for many countries around the world looking to grow as a power in the sport," he said.

"Getting to see Turkey's men's team play the USA in the Final at Sinan Erdem Dome in 2010 was a wonderful occasion. They represented the country with great success and it was a great start to an incredible run for Turkish basketball.

"The country should be very proud of the success achieved by the women's national team. They performed extremely well at the 2012 London Olympics as well as at the European level and most recently also at the youth level. This is an example of what hard work combined with strong government and commercial support can do to take the sport to the next level.

"I wish to thank TBF President Turgay Demirel, together with his staff and the volunteers. They have done a remarkable job in taking basketball to the top echelon of world.

"FIBA consists of 214 countries, from smallest to largest. Turkey rightfully stands in a select group of national federations that have hosted both the men's and women's world championships. The country produces outstanding players."

Mr Elphinston paid tribute to the TBF, the country's governmental and sporting authorities for ensuring that basketball - in particular the women's game - is being highly-promoted. He also applauded the wonderful concept of CAMP PASS IT ON and its resounding success, while also expressing his delight in knowing that a star-studded International Coaches Clinic will coincide with the final weekend of the Championship (4-5 October). 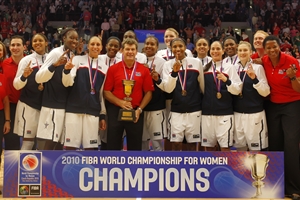 Moore already looking over her shoulder 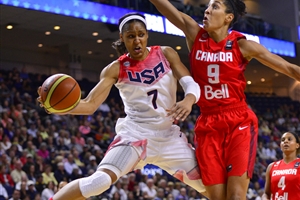