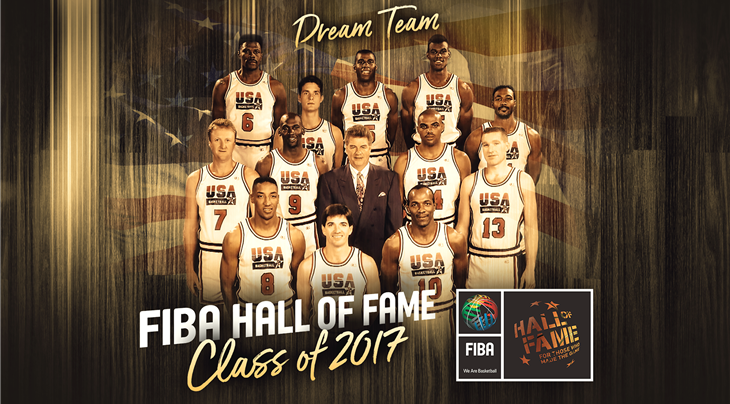 MIES (FIBA Hall of Fame) - Considered by many to be the greatest international team of all time, the Dream Team - the 1992 USA Olympic basketball team - is being honored with induction to the FIBA Hall of Fame in 2017.

The Dream Team is being enshrined into the Hall of Fame alongside former players Shaquille O'Neal (USA), Toni Kukoc (Croatia), Mickey Berkowitz (Israel), Pero Cameron (New Zealand), Razija Mujanovic (Bosnia and Herzegovina) and Valdis Valters (Latvia) as well as coaching great Dusan Ivkovic (Serbia). They were selected from a list of more than 150 candidates.

Christened the Dream Team by Sports Illustrated magazine, the USA selection for the 1992 Olympic Games in Barcelona was the fantasy team that existed in the real world. Given the license to use full professional athletes in Olympic basketball competition for the first time, the United States went full throttle in bringing together the most famous and accomplished group of NBA (and one collegiate) athletes of their generation. Not even the NBA All-Star Game could boast having this collective of talent on one side of the court.

The Dream Team was made possible after an extraordinary session of FIBA voted 56-13 (with one abstention) to allow all professional league players, including the NBA, to participate in international events on April 7, 1989.

Surprisingly, the American representative at the time, the Amateur Basketball Association of the United States of America, had voted against the change because the largest part of its constituency, American universities and high schools – the NBA was not a member - opposed it, believing it would take Olympic places away from amateurs. It certainly did that, with only one spot on the roster being reserved for an amateur player. It went to Laettner, the two-time NCAA champion and 1992 collegiate player of the year from Duke University.

The team went an expected 8-0 with an average winning margin of just under 44 points per game (43.8). The closest margin was 32 in the gold medal game (117-85) against Croatia. The Americans shot an efficient 58 percent while holding opponents to less than 37 percent.

Barkley led the team in scoring at 18 points per game, followed by Jordan at 14.9, and Malone at 13.

Of the 12 players on the team, Jordan and Robinson are currently in the FIBA Hall of Fame as individuals.

Ewing, Jordan and Mullin are the only players to win Olympic gold medals both as amateurs (1984) and professionals (1992).

The 2017 Class of the FIBA Hall of Fame will be inducted during a special ceremony at the House of Basketball - the headquarters of basketball's world governing body on the outskirts of Geneva, Switzerland - on Saturday September 30. 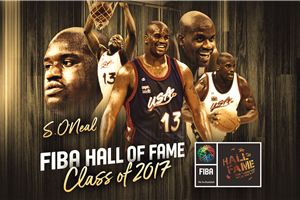 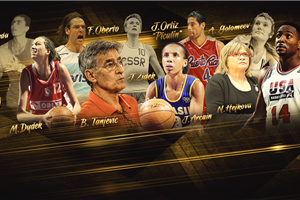