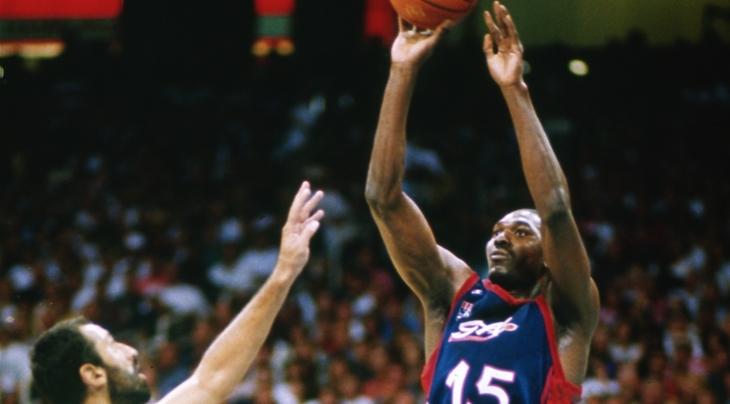 MIES (2016 FIBA Hall of Fame) - Hakeem 'The Dream' Olajuwon is being honored as an inductee of the 2016 Class of the FIBA Hall of Fame on 27 August at the House of Basketball in Mies, Switzerland.

One of the greatest players in the history of the sport, the Nigerian-born star made his mark in international basketball when he helped his adopted country, the USA, capture the gold medal at the 1996 Olympics in Atlanta.

In one of the most dominant sides ever assembled, Olajuwon and his teammates thrilled the crowds with eight victories in as many games and did so by an average winning margin of almost 32 points per contest.

Olajuwon's entry to the USA squad was evidence of how much respect and adoration he had in the country.

Arguably the best African player of all time, Olajuwon was all about power, finesse, hard work and humility.

The 2.13m center shot to fame after leaving Lagos as a teenager for the Houston Cougars in American college basketball.

Olajuwon did not play as much as he'd hoped for a Houston team that reached the NCAA Final Four in his freshman year, but after spending much of the following summer going up against the late Moses Malone in practices and pick-up games, he returned for his sophomore year a far more potent player. As a member of Phi Slama Jama, a nickname given to the Cougars because of the way they played the game above the rim, Olajuwon captured the imagination of basketball fans in America.

His college teams made it to the NCAA Final in 1983 and 1984, although they suffered heartbreak each time, the first to North Carolina State when the Wolfpack scored at the buzzer and the second when a Patrick Ewing-led Georgetown prevailed. Olajuwon had been so good in the 1983 tournament that he claimed the honor as the best player in that year's event.

After turning professional, Olajuwon remained in Houston when the NBA's Houston Rockets selected him with the No. 1 pick in the 1984 draft.

Olajuwon would go on to have a glittering career. He led the Rockets to back-to-back NBA crowns in 1994 and 1995, claiming the honor as the Finals Most Valuable Player on both occasions.

Olajuwon received recognition throughout his career. In his first title-winning campaign, he was the league MVP. Six times he was named to the All-NBA First Team and was an All-Star 12 times. He was named the Defensive Player of the Year in 1993 and 1994.

As good as he was on offense with his array of low-post moves that made him virtually unstoppable, 'The Dream' may have been better on the other end of the floor.

Olajuwon had a celebrated NBA career, which concluded in 2002 after a short stint with the Toronto Raptors.