TENERIFE (Spain) - Iberostar Tenerife jumped in the lead late in the first frame and held off a late Segafredo Virtus Bologna charge to win the 2020 edition of the FIBA Intercontinental Cup, adding the coveted title to their trophy case for the second time in their history.

Marcelinho Huertas was named MVP of the competition by a voting panel that comprised the accredited journalists, following an inspirational showing  in the second half of the Final. The Brazilian star scored 15 of his game-high 23 points in the third quarter, as he went 3 of 4 from behind the arc in that stretch.

"The shots didn't drop in the first half but they were not forced, they were shots I usually make. Even my free-throws didn't fall in, and I usually shoot close to 90 percent from the foul line.  But I kept playing the way I should to help the team, my confidence and my mentality don't change just because I missed a few shots, and things came naturally in the second half," Huertas said afterwards.

It took Tenerife almost four minutes to score their first points but Giorgi Shermadini came off the bench to help them get off the mark and fuel a 16-4 run to close the opening quarter.

With 5:32 left to the end of the second frame, Iffe Lundberg took the lane, kicked out to Sasu Salin and the Finnish international knocked down a triple from the top of the key to give the hosts their first double-digit lead of the night, 27-17.

Bologna looked to switch the momentum before going to the locker rooms as Filippo Baldi Rossi drilled a corner three and Stefan Markovic followed up with a layup, but Shermadini restored Tenerife's 10-point lead, 42-32, right at the halftime buzzer.

Tenerife appeared to be struggling offensively early in the third stanza as Bologna closed down passing lanes and took away much of the Spanish pick and roll action.

Salin however found just an inch of space and knocked down a three and on the ensuing possession, Aaron White dispossessed Milos Teodosic and darted down the floor to give the hosts their biggest lead of the night, 57-42 with 5:06 left to play in the third stanza.

Devyn Marble knocked down a corner triple 4:11 from the final buzzer to reduce the deficit to just three points, 70-67, for the first time since the opening frame.

But after Shermadini stopped the rot with one of his trademark hook shots, Tenerife got a stop on defense and Huertas drained a trey from the left corner to stretch the lead back to 9 points 2:29 from time and get the local crowd on their feet.

Teodosic missed a contested shot from behind the arc and Huertas came away with the ball and drew the foul, to essentially seal Tenerife's triumph from the stripe 40 seconds from the end.

"This club has reached four finals in the last years, three of them during my tenure. This is our second FIBA Intercontinental trophy and the first under the Final Four format. We have defeated the Italian league leaders, a team with a great coach and players of the highest global level and we have succeeded an historic club in AEK. So this trophy means a lot to all of us," said Tenerife head coach Txus Vidorrreta.

For Bologna, Teodosic had 15 points and 8 assists while Giampaolo Ricci and Julian Gamble added 12 points apiece, the former also bringing down 8 rebounds. 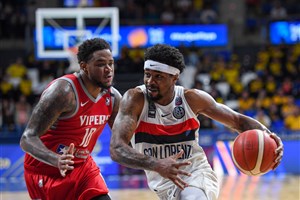