TENERIFE (Spain) - If you are among those who have tickets to Sunday's FIBA Intercontinental 2020 Final between Segrafredo Virtus Bologna and Iberostar Tenerife, the Spanish team's Gabriel Iffe Lundberg considers you very lucky.

"It's going to be a blast!" the Danish guard proclaimed, speaking to the competition's official website.

"It will be a very good game and one thing is for sure, whoever has bought tickets to the game won't be disappointed, regardless of the outcome."

"It's going to be a very exciting, physical game, there will be a lot of fans in the stands and it will be great fun for sure," the big man said.

The last time these two teams locked horns, in last May's Basketball Champions League Final in Belgium, the outcome was favorable to the Italian powerhouse.

Lundberg only joined Tenerife in the summer, so he has no first-hand experience of that Final. But it takes very little time on the island to realize how proud and protective of their club Tenerife fans are. Many have been hoping for a rematch ever since the participants of the FIBA Intercontinental Cup were announced, and they saw their team would once again be in the same competition as Bologna.

"Well, there's been just a little bit of talk about it," the Dane said with a laugh.

A quick glance at the two teams' rosters last season though will tell you that very few, if any, meaningful comparisons can be drawn between May's game and what we will see on the court on Sunday.

"It's just that, when you play in a final, you can only play with the intention to win it. Even more so when you play at home. They are the clear favorites, so we are hoping for an upset. "

While Tenerife adopt the role of the underdog, it doesn't mean that they are renouncing their ambition to lift the FIBA Intercontinental Cup for the second time in the space of three years.

"Luckily, we have our crowd here and it's going to be packed for sure. Virtus is obviously a really, really good team and they are doing very well this season, but I think we can beat them," said Lundberg.

"We have to go back and look at what we can do better than in the Semi-Final, but I think we will be ready, we can do it."

Ultimately, when these two highly competitive, highly experienced teams take to the court on Sunday, the will to win a title will matter more than any labels of favorites and underdogs. It will be enough to even overcome any tiredness both sides must feel following their hectic game schedule in the past couple of weeks.

"Our expectation is to win," said Gamble.

"That's what we have prepared ourselves for, that's our goal coming into this. We took the first step on Friday, now we have 40 minutes of basketball left."

And basketball is sacred in Bologna. It is part of the fabric of the city almost on a par with its world-famous culinary tradition, university and culture.

"We are proud to play in another final, I am very proud of my players and we are here representing the club, the city, ourselves and our families," said Bologna head coach Sasha Djordjevic.

In 'Basket City', as Bologna is affectionately known in Italy, fans don't forget their success in the 2019 Basketball Champions League Final is what brought them in this position.

"We owe something to the staff and the players that won the BCL last year," said Bologna big man Giampaolo Rizzi.

"We are here thanks to them, and we have to thank them by winning." 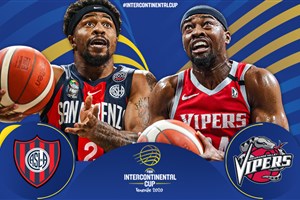 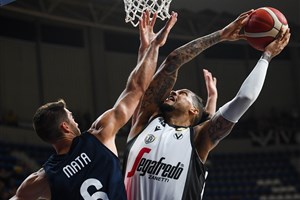