WURZBURG (Germany) - After dominating the proceedings a week ago in Italy, s.Oliver Wurzburg picked up where they left off and dealt Pallacanestro Varese an 89-86 defeat in the second leg of the Semi-Finals to clinch their first-ever Final appearance in international play.

Having led by as many as 19 points, the Denis Wucherer-coached home side allowed their Italian guests to improve the optics of the score with a fourth-quarter comeback, but were never in danger thanks to a 23-point cushion from the first leg.

Turning point: The home side put aside any thoughts of their first-leg advantage and put a stamp on their ticket with a lights-out display in the first quarter. Connecting on five three-pointers in the opening period, they opened up a 30-11 lead to add some extra padding on an already large lead.

Game hero: It wasn't a game that required a lot of individual heroics, with six different Wurzburg players entering double figures, but Xavier Cooks stood out from the crowd with 11 points, 9 rebounds, 3 blocks and 2 assists.

Stats don't lie: Despite outscoring Wurzburg 42-22 inside the paint, Varese once again couldn't buy a bucket from three-point territory. They went just 8-of-28 from deep, while Wurzburg drained 11 triples on 24 attempts.

Bottom line: Wurzburg became the second German team to reach the Final of the competition, with Fraport Skyliners claiming the FIBA Europe Cup trophy in 2016 after, symbolically, beating Varese in the title clash.

They said: "Hats off to Varese. They never gave up and came back very strong in the end to make it a close game. But if someone had told me before the game we would be up by two points two minutes before the end, I would have been happy. We took care of business early in the first half and showed them that they would not be able to turn around the deficit from the first game today. Now we made it to the Finals and can win the FIBA Europe Cup with another two good games." – s.Oliver Wurzburg forward Florian Koch

"We wanted to come out and control the tempo of the game early, and that is what we did. Everybody played well in the first half. Everybody stepped up, which was very important for the end result which is all that matters today." – s.Oliver Wurzburg guard Skyler Bowlin

"Mission accomplished. We are happy that we made to the Finals and also with the way we played in the first and then again in the third quarter. That was enough to lay the groundwork and gave us the chance to rest players a little bit and play with a longer rotation. We ended up winning the game in the end against an aggressive team that tried to win this game and a coach that did everything to win this game. To make it to a European final is new territory for me as a coach and for us as an organization. We're going to do everything we can to represent our club and our city well and win the FIBA Europe Cup." – s.Oliver Wurzburg head coach Denis Wucherer 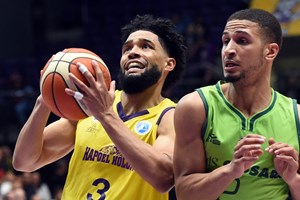 Mission (im)possible: How likely is a comeback away from home?