MUNICH (FIBA Europe Cup) – There were upsets galore on the opening day of Group Phase action in the FIBA Europe Cup, with Kataja Basket tipping off the Regular Season with a triumph against Aris in Thessaloniki and Turkish sides Istanbul BBSK and Sakarya BSB falling at the hands of Donar Groningen and ZZ Leiden, respectively.

The Juha Sten-coached Kataja Basket got their Group G campaign off the ground with a stunning 79-70 victory in Greece, completing a 24-point turnaround after trailing by as many as 15 points in the first half of the contest.

The Finnish side fell behind 29-14 in the opening stanza of the game, but came back with a powerful 24-6 response that swung both the scoreline and the momentum in their favor. 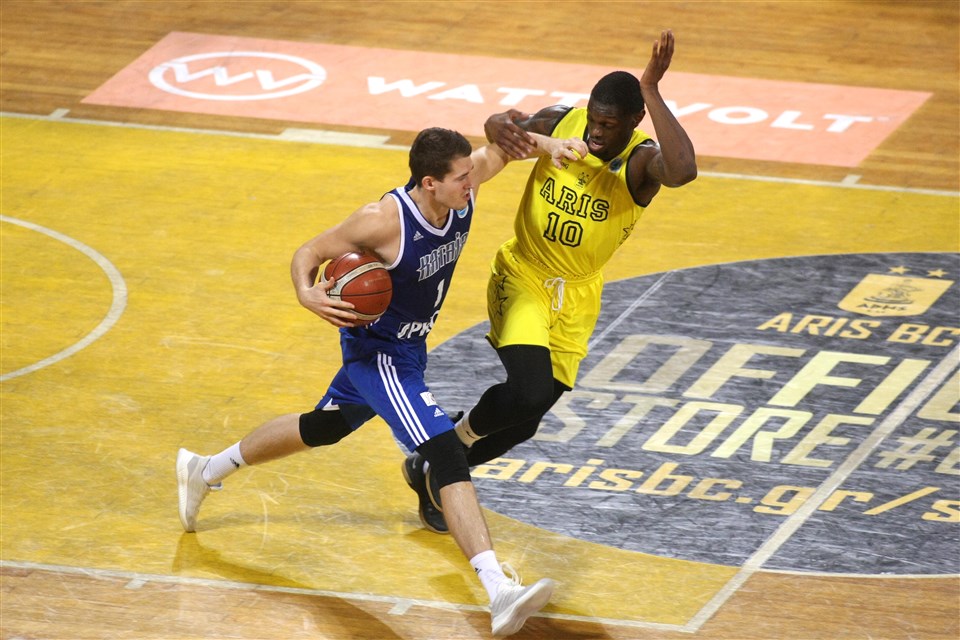 "As a team, I think we played very well. We got down a little bit in the first quarter and started playing one-on-one, but we started to share the ball and that helped us a lot," spoke Daniel Mullings, who put together a 12-point and 7-rebound effort with 3 steals and 2 blocks.

Vincent Simpson collected 13 points and 7 assists, while Ryan Wright and Topias Palmi chipped in with 11 points apiece for the Joensuu club from Finland. Having scored 18 and 17 points respectively, Gary Bell and Michael Kyser were the top scorers for Aris.

“Nick Galis Hall is not an easy place to take a win and I'm really happy that we managed to do that.”- Kataja Basket head coach Juha Sten

"Nick Galis Hall is not an easy place to take a win and I'm really happy that we managed to do that," Kataja Basket playcaller Juha Sten said in the press conference. "Maybe we respected Aris a little too much and had a slow start, but we made some good shots and got some confidence. That's what happens in basketball."

The other big story-line of the day was the perfect start for all three Dutch clubs, with Donar Groningen, ZZ Leiden and New Heroes Den Bosch all claiming opening-day wins. 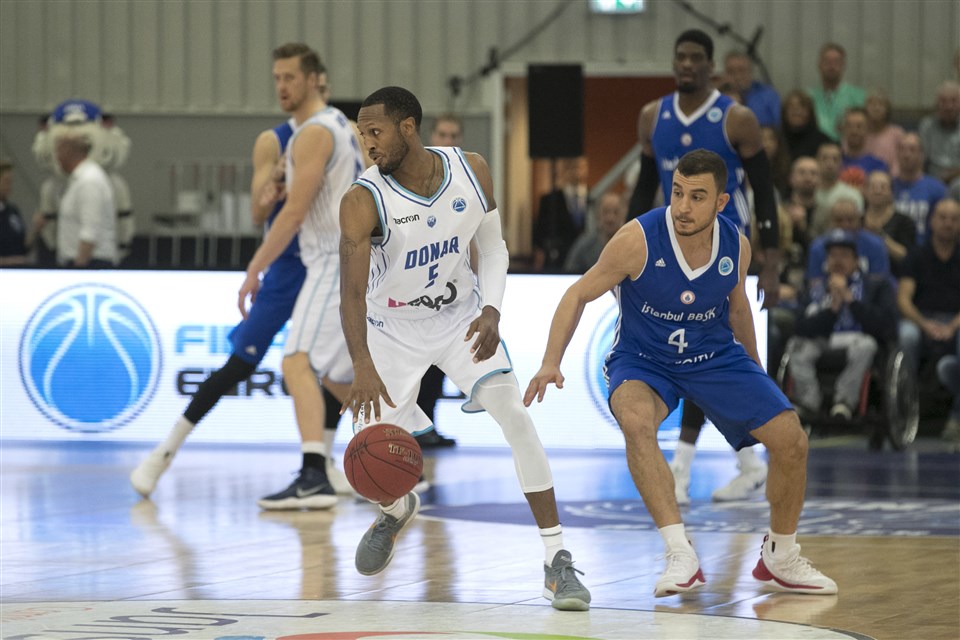 Donar Groningen defended their home court against the mighty Istanbul BBSK, coming out victorious 90-81 in a close-fought contest in Group C behind an efficient 17-point and 5-assist display from Teddy Gipson.

Meanwhile, the ZZ Leiden one-two punch of Worthy De Jong and Darius Thompson punished Sakarya BSB in Group A. Having both played without any rest and finished the night with 20 points each, they grounded the Turkish side with a 69-56 upset away from home.

The Steven Cook-led Den Bosch made it three wins out of three for the Dutch with a dominant 91-58 display against BK JIP Pardubice in Group D. He punished the guests from Czech Republic with 24 points, 6 rebounds and 6 assists. 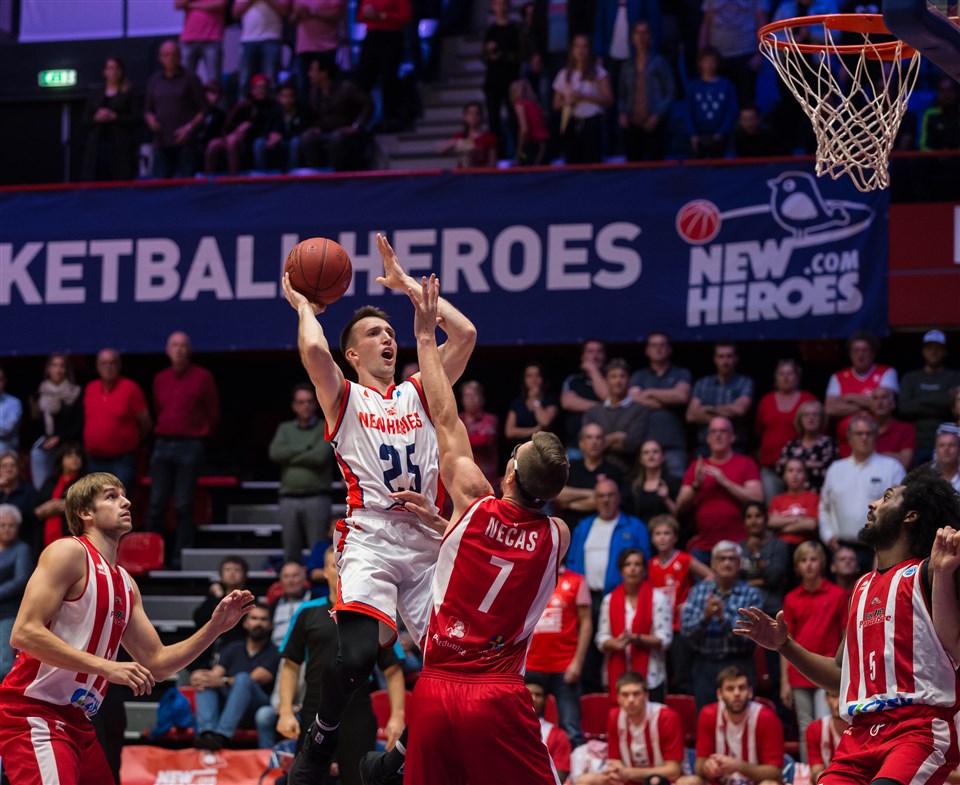 Den Bosch began the Regular Season with a 33-point win

The other Group D fixture between Avtodor Saratov and Ironi Ness Ziona ended in favor of the Russian hosts, who topped the FIBA Europe Cup newcomers from Israel 75-64.

In Group A, s.Oliver Wurzburg defeated CSM CSU Oradea 82-69, while Pinar Karsiyaka joined Donar Groningen at the top of Group C following an 86-77 win on the road against Spirou Basket. 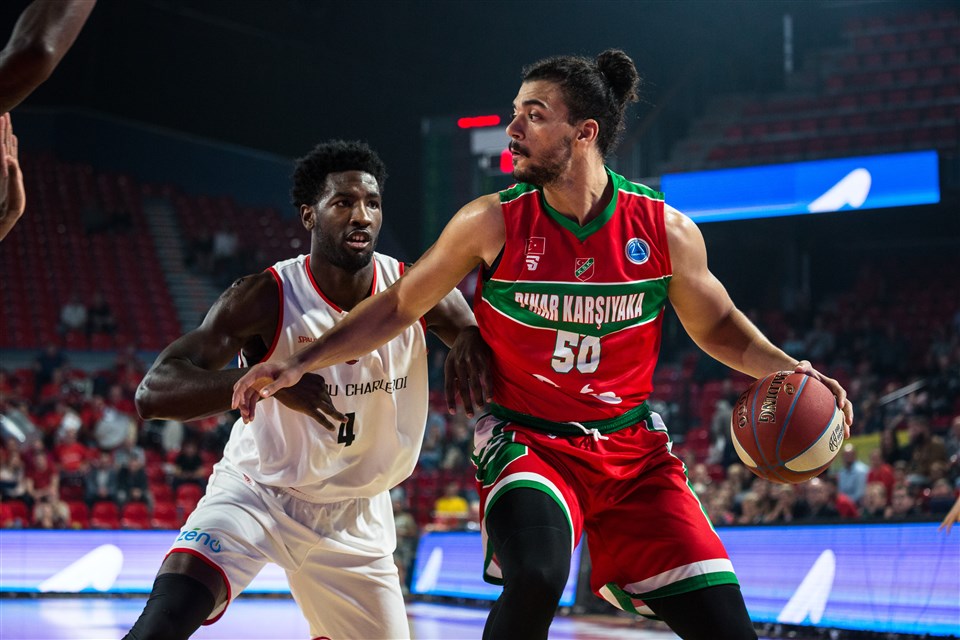 Pallacanestro Varese returned to the FIBA Europe Cup with a 95-76 win over Rilski Sportist in Bulgaria, while their Group F rivals Alba Fehervar squeaked out a close one against FC Porto in Portugal, 96-92 in overtime. In Group H, Szolnoki Olaj bested Falco Vulcano 79-76 in an all-Hungarian clash and Dinamo Sassari came away with a 90-78 victory from England after defeating Leicester Riders. 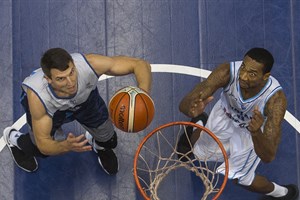 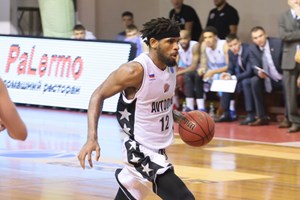