MUNICH (FIBA Europe Cup) – A record-tying performance earned Avtodor Saratov forward Perrin Buford the Top Performer honors on the opening week of the Regular Season while helping the Russian side to a hard-fought victory at home.

Having connected on 6-of-13 attempts from the floor and 8-of-10 from the free-throw stripe, Buford finished the contest with an efficiency index of 39. He became only the third person in the history of the FIBA Europe Cup to notch down 19 rebounds in a single game.

Meanwhile, Tyler Cain of Pallacanestro Varese registered a 19-point and 13-rebound double-double with 4 assists, as the Italian club eased by Rilski Sportist 95-76 on the road in Bulgaria.

Alba Fehervar forward Rodney Bullock collected 15 of his points in the fourth quarter and overtime, as the Hungarian side squeezed out a 96-82 victory against FC Porto. Having collected a game-high 29 points, he was efficient both from the field and from the charity stripe, going 7-of-12 and 12-of-13 respectively.

Rounding out the Team of the Week, ZZ Leiden guard Worthy De Jong posted 20 points, 10 rebounds, 5 steals and 2 blocks, as the Dutch side scored a major upset in Turkey, beating Sakarya BSB 69-56 away from home. 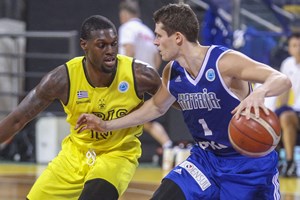