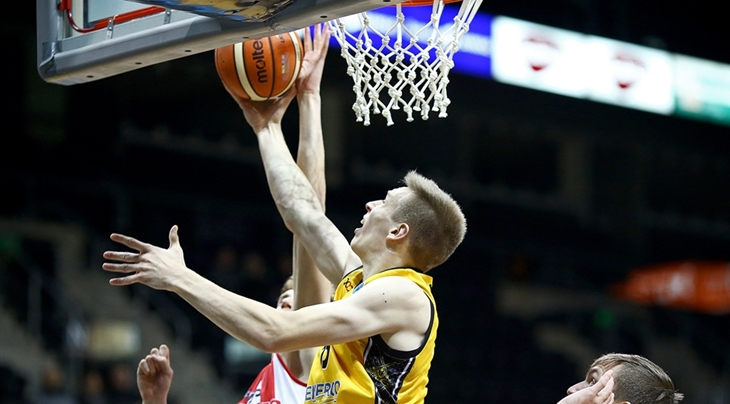 MUNICH (FIBA Europe Cup) – In his FIBA Europe Cup farewell, 19-year-old Lithuanian rising star Martynas Echodas put together a league-best performance in the final week of the Regular Season, but Siauliai could not end their losing streak before bowing out of the competition.

The up-and-coming power forward recorded his fourth double-double this season with new personal bests in points and rebounds in an 89-85 defeat against Pardubice on the road in Czech Republic.

Having scored 30 points on 10-of-16 shooting from the field and 10-of-11 from the free-throw stripe, Echodas also added a season-high 14 rebounds in 35 minutes of action for a total efficiency index of 37.

Elan Chalon center Moustapha Fall was second on the Top Performer list in efficiency, with a ranking of 35, after amassing 18 points, 13 boards, 4 assists and 2 blocks in his best performance of the season.

The French side rode on the back of Fall's stellar play to rout Alba Fehervar 106-77 and were one of a handful of clubs to book their tickets to the Second Round this week.

Lance Jeter of Donar Groningen is another player who stepped up in a time of need for his team, leading the Dutch side to a 79-72 back-against-the-wall victory over Kormend on the road in Hungary that secured their Second Round berth.

The 28-year-old American floor general pushed the usual playmaking duties slightly to the side and took care of the scoring himself, collecting a team-high 26 points on 9-of-15 shooting from the field, including six made three-pointers, and added 7 rebounds, 3 assists and 3 steals.

Meanwhile, on the other side of the barricades, Kormend's guard Parrish Petty could not steer his team to a win despite 31 points, 5 rebounds, 3 assists and 3 steals.

However, it wasn't all doom-and-gloom for the Hungarian side, as the 7-point loss did not prevent them from claiming one of the qualification spots reserved for the best third-spot teams.

Elsewhere, Limburg United's forward Ben Simons drained 7-of-8 from beyond the arc, scored a season-high 29 points and added 2 rebounds and 3 steals to lead the Belgian side to a maiden international victory in the club's history.

Despite picking up five losses in a row, the team from Hasselt defeated Group B leaders BCM Gravelines-Dunkerque 84-77 in the final game of the Regular Season and ended their FIBA Europe Cup campaign on a high note. 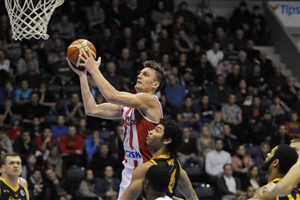