MUNICH (FIBA Europe Cup) – All five players chosen as Top Performers helped their teams to victories in the second week of FIBA Europe Cup, with Yordan Bozov’s overtime heroics for Rilski Sportist in Prishtina on Wednesday evening being particularly memorable.

The 37-year-old veteran scored 28 points, grabbed 8 rebounds, dished out 3 assists and recorded 3 steals on his way to a the best efficiency performance index among all players  with a ranking of 35, as his side defeated Sigal Prishtina 104-100 in the extra period.

Justin Cobbs of BCM Gravelines finished a close second after collecting 25 points on 8-of-14 shooting and adding 10 assists in a 95-76 win against Kormend.

Having followed up a great Week 1 performance with a double-double of 20 points and 11 rebounds against Demir Insaat, Enisey Krasnoyarsk center Frank Elegar is the only player to make the list for the second consecutive week.

Meanwhile, Karam Mashour got the Top Performers nod after a 22-point, 9-rebound and 6-steal display for Bnei Herzliya against the visiting Prievidza side.

The field is rounded out by Apoel Nicosia forward Akeem Wright who had 23 points, 6 rebounds and 3 steals in the Cypriot team’s very first win of the season in FIBA Europe Cup that came in Siauliai. 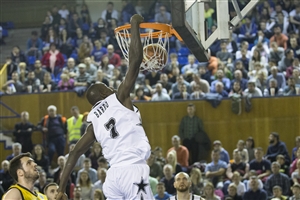 Nzeulie looking for greatness with Elan Chalon and Cameroon 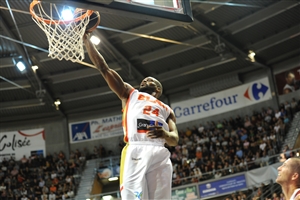