SKOPJE (North Macedonia) - It was a long time coming, but Lithuania won the FIBA U16 European Championship for the first time since 2008. Throughout the tournament in Skopje, they were the dominant side, beating the other four top-ranked teams on their way to the title.

Leading the Lithuanian team in scoring, skilled wingman Nojus Indrusaitis was voted into the tournament's All-Star Five. For the US-born youngster from the Chicago area, it was his first tournament on European soil, and he immediately made his mark with consistently good performances throughout the event.

Considering his success in Skopje, it's time for FIBA contributor Marius Flachenecker to take a closer look at his game.

His ability to drive to the basket sticks out immediately about Indrusaitis' game. Throughout the tournament, he was a consistent presence at the rim. Opponents had a lot of trouble trying to keep him out of the paint, which is why the 16-year-old finished with the fifth most free throw attempts in the competition. Standing roughly 1.95m, the wing combines a good first step with solid ball-handling skills, which allowed him to effectively score out of pick-and-roll and attack closeouts. Indrusaitis can drive to either side and has a plethora of moves that allow him to lose defenders on the way. For one, he's good at maneuvering tight spaces with his dribble alive. Secondly, he effectively changes up the length of his strides to create shot windows, and he also flashes the ability to use his body to open up space, for example by bumping his defender with his hips. At the basket, he's a solid, though sometimes overambitious, finisher, who impresses with ambidexterity. In Skopje, he confidently went to his left off-hand on several layups and had a good success rate on them. Furthermore, he shows glimpses of a floater game to counter defenses focused on sealing off the rim.

In addition to his driving ability, he also shows intriguing shooting potential. Indrusaitis finished the tournament shooting 9-of-25 (36 percent) from three and 33-of-41 (80.5 percent) from the free throw line, the fifth-best percentage among all participants with at least 15 attempts from the charity stripe. The Lithuanian clearly has high-level touch and the potential to become a very good shooter, once he gets more consistent. His shooting mechanics are a bit unorthodox, but they work for him, and his sky-high release makes it hard to contest his shots. In fact, he drew quite a few three-shot fouls because opponents were trying to get up to his release point. Indrusaitis even shows flashes of running off screens for three-pointers of movement, which would make him an even more dangerous weapon. Indrusaitis' scoring game is already very polished – after all, he finished the tournament with 15.1 points per game and a good true shooting percentage with 56.8 percent - but like any 16-year-old, he also has plenty of room to improve, especially when it comes to reading the game in pick-and-roll situations. His best passing read, which he consistently makes, is finding the roll-man when defenses send two players at the ball. In other situations, however, he can be too scoring-focused, playing with his head down and missing open teammates in the process. This can especially occur in drop coverage, where the ball-handler needs to be more patient and carefully read the defense.

If he can improve this area of his game, he could develop into a versatile wing scorer, who can effectively play on and off the ball. This was another skill that stood out about him in Skopje. He can create shots for himself at a decent rate, but he was also able to co-exist with Lithuania's other guards because he's an active off-ball mover, can efficiently knock down spot-up threes and is a great closeout attacker. Even though Indrusaitis, Kasparas Jakucionis and Mantas Laurencikas like to have the ball in their hands, they managed to play together and make each other better, which was ultimately a key part of them winning the gold medal, and it can also be a big reason why Nojus Indrusaitis can develop into an excellent player at the professional level in the long-term. In his first FIBA tournament, Nojus Indrusaitis exceeded all expectations and proved why he's considered a high-level prospect over in the US as well. The wing displays an outstanding scoring game with his ability to get to the rim and finish there but also knock down shots from distance. With his combination of athleticism and skill, the 16-year-old can become a key player for Lithuanian youth national teams for the next few years, and he also has high potential as a pro, if he works on some of the improvement areas in his game. With proper development and a bit of luck, Indrusaitis could become a staple of Lithuania's senior national team, and he's not the only player from this U16 squad who has the potential to do so either. 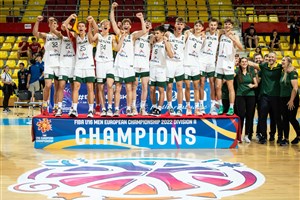 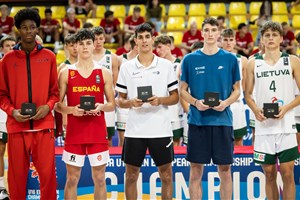 Lithuania, Spain ready to face off in Final