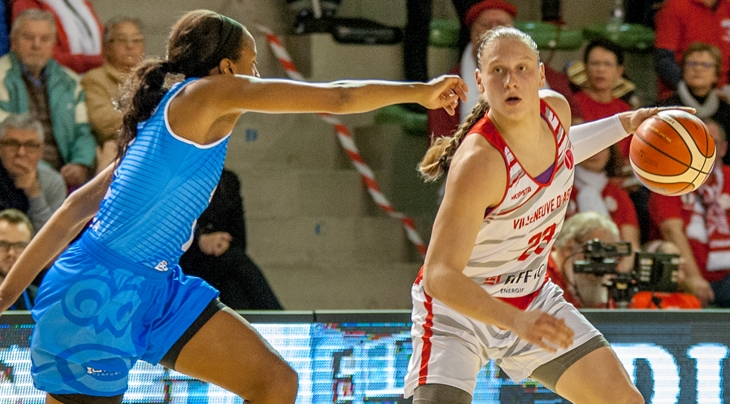 ESBVA-LM AND CAROLO BASKET INTO SEMI-FINALS
ESBVA-LM were led by 18 points from Iagupova, as they won 81-68 at Mondeville to continue their recent good run - one which has many observers tipping them to land silverware.

They were joined in the last four by Flammes Carolo Basket who also punched their ticket after completing a 2-0 series win in their respective Quarter-Finals tie with Nantes. They collected a 76-52 road win which was underpinned by a brilliant 14 points and 13 assists from Les Bleues point guard, Amel Bouderra.

Reigning champions BLMA are under pressure after they were beaten 72-70 at Hainaut Basket, who had only lost the first meeting in overtime. Tango Bourges Basket will also have to win a decider if they want to advance after they lost 74-68 at Basket Landes, with their former favorite Celine Dumerc scoring 21 first-half points for the jubilant hosts.

BELLONA AGU DENY EUROCUP WOMEN OPPONENTS
In a quirk of fate, Bellona Agu and Yakin Dogu Universitesi ended up meeting each other in the Turkish League right in the middle of the two legs of the 2017 EuroCup Women Final between both clubs.

Bellona Agu exacted revenge for their narrow home loss last week by taking a dramatic 76-74 win against their rivals as Ann Wauters rolled back the years with a superb 25 points and 12 rebounds.

The result delays what still looks a likely Regular Season title for YDU, although Fenerbahce are ready to pounce after their new play-caller Firat Okul masterminded a 90-81 win against Girne Universitesi, as the backcourt got it done with 11 assists from Birsel Vardarli-Demirmen and 24 points from Alexandria Quigley.

Meanwhile, Galatasaray leaned on Latvia's Kristina Vitola for a smart shooting-performance as she impressed with 16 points and 8 rebounds in an excellent 82-69 victory in Antakya against Hatay BSB.

KURSK AND UMMC TO CONTEST RUSSIAN FINALS
They could feasibly meet in the title game of the EuroLeague Women Final Four this weekend, but a showdown in the Russian Finals is now guaranteed for Dynamo Kursk and UMMC Ekaterinburg.

Kursk, who finished in the number one spot during the Regular Season, completed a Semi-Finals series sweep against Dynamo Moscow with a comprehensive 98-62 win in the capital. French center Helena Ciak turned heads by posting 17 points and 9 boards.

UMMC were similarly rampant as they swept aside Nadezhda Orenburg 80-64 off the back of 24 points from Diana Taurasi.

WISLA INTO FINALS AS POLKOWICE MADE TO WAIT
There was joy for defending BLK champions Wisla Can-Pack as they made the Polish League Finals by completing a 68-60 win at Artego Bydgoszcz. Veteran star Ewelina Kobryn excelled with 18 points and 11 rebounds.

However, there was derby pain for CCC Polkowice who were soundly beaten 71-52 on their own court by Sleza Wroclaw, meaning the series will now go to a decisive fifth game.

Prague must focus firstly on the pending EuroLeague Women Final Four, but will be heartened by a super 17-point showing from Latvian center Anete Steinberga which wrapped up an 84-39 victory against Basketball Nymburk.

ELSEWHERE IN EUROPE
There was another high-profile setback in the Swiss Cup Final for EuroCup Women entrants Elfic Fribourg who were beaten 61-59 by BC Winterthur in Geneva. It came 12 months after being edged out by a point by Muraltese.

Beretta Famila Schio, Gesam Gas Lucca and Passalacqua Ragusa are all into the Semi-Finals of the Italian Play-Offs, but Reyer Venezia will have to bounce back from a 71-58 defeat at Saces Mapei Dike Napoli by winning the decider on home soil on Wednesday. 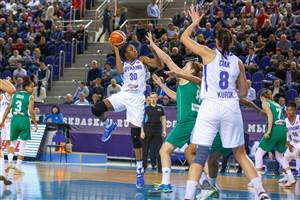 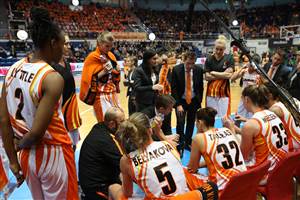