KOSICE/MARIJAMPOLE (EuroCup Women/EuroLeague Women) – The titles are beginning to get handed out in leagues right across Europe, with Good Angels Kosice and Sudova two of the latest clubs to secure their respective Championships.

Good Angels have repeated as Extraliga champions in Slovak Republic, courtesy of a 69-55 win against Piestanske Cajky which sealed a sweep of the Championship series.

It was a great night for veteran Zuzana Zirkova who top-scored for her team with 18 points, while Slovenian point guard Teja Oblak added 13 points.

It was a memorable night in Marijampole as Sudova captured their first ever Lithuanian LMKL title thanks mainly to rising star and MVP Laura Svaryte. Her 19 points and nine rebounds underpinned a historic evening for her team which witnessed a landmark and decisive 70-54 win against Hoptrans-Sirenos.

EuroLeague Women side Beretta Famila Schio are under pressure in the Italian Play-Offs after they were beaten in their Semi-Finals series against Passalacqua Ragusa who made it 1-1.

Led by Astou Ndour who netted a very nice 19-point haul, Ragusa took a thrilling 71-68 success at Schio to stun the locals, with Chiara Consolini also dishing out nine assists against her ex-employers. Even the return of powerhouse Isabelle Yacoubou wasn’t enough to inspire the hosts – although she did record an impressive 15 points and 10 rebounds.

Gesam Gas Lucca are even closer to the Finals after taking a second straight Semi-Finals success against Reyer Venezia. New Zealand star Jillian Harmon shone brightly with 14 points and 10 rebounds in a hard-fought 60-56 win.

Having already won the Turkish Cup and most recently a first piece of EuroCup Women silverware, Yakin Dogu Universitesi are now also the number one team in the KBSL after finishing the Regular Season in top spot.

BIG TWO IN SPAIN READY TO GO HEAD TO HEAD

Defending champions Perfumerias Avenida will lock horns with main rivals Spar Citylift Girona in a fight to retain their Liga Femenina crown after both clubs passed into the Finals by sweeping their opponents in the Semi-Finals .

TOP TWO IN HUNGARY TO TUSSLE FOR TITLE

The leading two sides in the Hungarian League will also contest the Championship after both Atomeromu and EuroLeague Women side Uniqa Sopron made it past the Semi-Finals.

Maja Erkic dropped 19 points and her Slovenian national team colleague Eva Lisec claimed a double-double of 16 points and 11 boards as Atomeromu beat VBW CEKK Cegled 74-67 on the road. Uniqa Sopron also took a win on their travels as they outlasted CMB Cargo Uni Gyor 83-65, with Shenise Johnson starring after she registered 18 points, 10 rebounds and 4 assists.

Defending champions BLMA are safely in to the LFB Semi-Finals after they collected the last ticket via a 74-51 victory against a pesky Hainaut to advance into the last four. Geraldine Robert was the standout performer with 20 points.

EuroCup Women duo TSV 1880 Wasserburg and Rutronik Stars Keltern look set to meet in the German DBBL Finals after both got off to winning ways in their respective Semi-Finals match-ups. Wasserburg benefited from 18 points by Rebecca Tobin to sink Saarlouis 88-62, while Anite Teilane and Maja Vucurovic shared 30 points for Keltern in their 77-60 success against Marburg.

Lulea Basket are on the front foot in the Swedish Championship Finals after they stunned regular season winners Udominate 69-41 in the series opener. It was veteran Sweden national team forward Anna Barthold who made the biggest noise with a brilliant double-double of 15 points and 12 rebounds.

Athlete Celje are looking to continue their dominance in Slovenia as they made the Championship Final for a stunning 18th successive season. They will face arch rivals Triglav after beating Konjice 69-53 to win the Semi-Finals 2-0 after Andrea Maric fired 17 points off the bench. 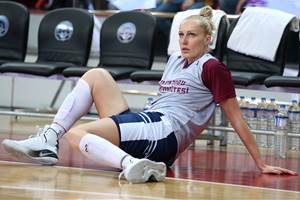 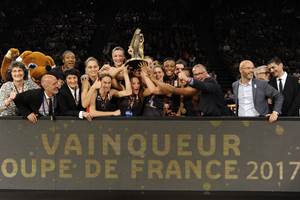